But the proceedings did not end for either the Vineyard Road cell tower, under review by the Town of Philipstown, or the Rockledge Road tower, under consideration by the Village of Nelsonville.

Instead, in Philipstown, the third round of a public hearing that began in mid-November ended Monday night (Jan. 8) with an agreement by cell tower applicant Homeland Towers LLC and two regulatory boards to heed the request of tower foes and ask the owner of the proposed site to put the 140-foot structure in a less conspicuous place on his property. One board also signaled reluctance, for environmental reasons, to allow the tower to use the site so far chosen for it.

Two days later, a similar Nelsonville hearing concluded with Homeland’s promise to extend the Rockledge proposal “shot clock,” or deadline, to Feb. 28. Nelsonville’s two regulatory boards then set the deadline for residents to submit comments to Feb. 9, with a deadline of Feb. 20 for responses, and to re-convene the week of Feb. 26 to presumably approve or deny the application.

The shot-clock provision, mandated by the Federal Communications Commission, requires municipalities to act on tower applications within 150 days, although the applicant can agree to extend that.

Under the agreement reached Jan. 8, the Philipstown Zoning Board of Appeals (ZBA) and Conservation Board will resume discussions on Jan. 22 after the town and Homeland make overtures to the landowner, Chris Fadden, of CF Diversified Corp. Homeland has signed a lease for the use of a parcel on Fadden’s 64-acre property.

The town has suggested using an alternative site on Fadden’s land to make the tower less visible and intrusive. But at the meeting, representatives from Homeland Towers said Fadden has already declined to change the location.

“The block seems to be Mr. Fadden and that’s what I’m trying to break,” said ZBA Chairperson Robert Dee. “If he refuses to meet, it will be a very short hearing” on Jan. 22. 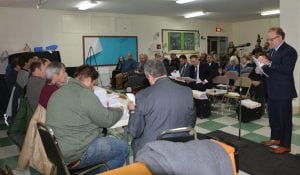 Homeland Towers attorney Robert Gaudioso addresses the Philipstown Zoning Board of Appeals and Conservation Board at a Jan. 8 hearing, which was held at the Philipstown Recreation Center . (Photo by L.S. Armstrong)

Like others, Dee expressed frustration that one person could thwart efforts to reach a compromise. “I just find it obscene,” he said. Paul Eldridge, a neighbor, agreed, calling it “patently, grossly unfair. There’s something wrong when somebody can dictate the situation and we have no recourse.”

Vineyard Road winds uphill from Route 9 just south of the intersection with Route 301, known as Mekeel’s Corner. The corner already contains a tower, not owned by Homeland, that serves Verizon and other carriers. However, Homeland, which is partnering with Verizon, considers the 20-year-old existing tower inadequate to meet what it calls a “significant gap” in high-tech, commercial wireless access.

Another tower, also about 20 years old, stands above Route 9 along Tower Road, 2.2 miles from the intersection.

Homeowners near the proposed Vineyard Road site have argued that their wireless service is fine. The debate over the perceived gap, and its significance, has continued since the application surfaced in June.

The last-ditch effort to persuade Fadden came after another long evening of often heated exchanges. Homeland needs a special-use permit from the ZBA and a wetlands permit from the Conservation Board to build the tower.

Manny Vicente, the president of Homeland Towers, which is based in Danbury, chastised community members for objecting to cell towers and the Philipstown government for being uncooperative. He said Homeland Towers approached Philipstown in February 2010 about possible sites and “got no advice, no help, no recommendations.”

Yet, “not only is there a history of a need for commercial wireless service” in Philipstown, he said, “there’s a public safety need” for emergency services communications.

Vicente cited a 2011 report commissioned by the Town Board that reported firefighters saw a need for better radio communications and that other towns have partnered with cellphone companies to reduce the costs of equipment. Even seven years later, Vicente said, “there is a fundamental resistance to development of this infrastructure in this community.”

As the hearing concluded, members of the Conservation Board presented a statement expressing reservations about the tower as proposed.

“The Conservation Board has never allowed a building in a wetlands buffer or encroachments on water courses unless there is an absolute, compelling reason to do so,” it read. “The fact the landowner will not allow alternative sites on his property to be investigated is not a compelling reason.”

Stretching for more than three hours, the Jan. 10 joint hearing by the Nelsonville Zoning Board of Appeals and Planning Board also featured sharp exchanges about a 110-foot tower proposed for a 9.6-acre, hillside plot above the Cold Spring Cemetery.

As he had at the Philipstown hearing two days earlier, Robert Gaudioso, a lawyer for Homeland Towers, reiterated the need for a tower to deal with dropped calls and insufficient access. “It’s inside buildings and inside vehicles that you have a problem,” he said.

Steve Marino, who chairs the Planning Board, noted that his family does have difficulty making calls from their home on Main Street. Yet he also wondered if another technology, such as a distributive antenna system, would work. “I’d like it justified as to why it can’t be done here,” he said. “It’s a less visibly intrusive option.”

Gaudioso challenged that and cautioned that a municipality cannot legally demand that a wireless provider use a specific technology or vote “to prohibit service.” 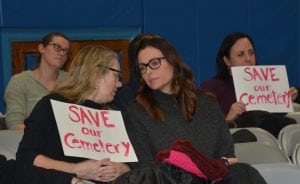 At a hearing on Jan. 10, Nelsonville residents voiced concerns about the impact of a proposed cell tower on the Cold Spring Cemetery below the site. (Photo by L.S. Armstrong)

Albert Tagliaferri, area director of the Center for Municipal Solutions, which advises local governments on telecommunications issues, said the planned “monopine,” or tower disguised to resemble a tree, “is the wrong structure to service this area” and proposed distributed antennas as a better option.

Michelle Smith, executive director of the Hudson Highlands Land Trust, questioned why Homeland Towers seemed to dismiss the fact that the site is protected by the state as an “area of scenic significance.”

“I’m very puzzled why you think that does not apply,” she told Gaudioso. Smith said the Rockledge tower would be visible from Storm King and Crow’s Nest mountains across the Hudson River as well as, closer to home, Bull Hill, which looms over Cold Spring and Nelsonville, and vantage points leading to its summit.

Doris Chandler, who moved to Cold Spring from Alabama to become the pastor at the First Presbyterian Church of Philipstown, spoke of the uniqueness of her new home. “It’s extraordinary. It’s a treasure,” she said. “You have great a responsibility to be stewards, to be caretakers. I hope you’ll give due consideration to preserving the beauty of this place.”

One thought on “Cell Tower Decisions, on the Clock”