When Nelsonville Mayor Bill O’Neill placed a check for $20,674.75 on the meeting table at Cold Spring Village Hall on Wednesday (Jan. 10), it marked the first tangible progress toward ending a year-long dispute between the two municipalities over the cost of fire protection.

Both village boards participated in the two-hour marathon that often wandered from topic to topic with no clear resolution in sight.

The Jan. 10 payment replaced a check from October 2016 that Cold Spring refused to cash because it did not include $1,004 for the cost of the Length of Service Award Program (LOSAP), a pension for volunteer firefighters. Nelsonville balked at paying into the program. 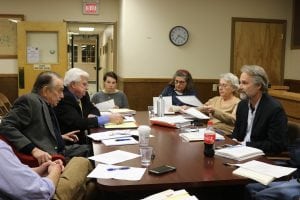 That sticking point was eliminated when both sides agreed that future bills will not break down costs in detail. Instead, invoices will include a single figure that reflects Nelsonville’s share of the aggregate cost of operating the Cold Spring Fire Company, excluding capital improvements such as pending roof repairs.

The boards also agreed that contracts will be for one year rather than five as suggested by Cold Spring. Billing and contracts will mirror the format used when Cold Spring bills the Town of Philipstown for fire protection.

The test of the détente will come in the months ahead as Cold Spring determines the amount of Nelsonville’s semi-annual invoice. Even after two hours of discussion, there was no firm agreement on how Nelsonville’s “fair share” of fire company costs should be determined. Possible criteria included using the rate of assessed property values, population, number of calls by the company and the relative area of the municipalities.

Michelle Ascolillo, Cold Spring’s accountant, suggested the fire company’s actual costs be used. In that scenario, the contract would be adjusted up or down once actual costs from the previous year are confirmed.