Cold Spring officials on Jan. 11 asked the Haldane Central School District to close today (Friday) because of potential water pressure issues after it was discovered a village reservoir was four inches lower than it appeared.

Due to frigid temperatures, the water level had been masked by a cover of ice that collapsed on Jan. 11 as temperatures rose, said Water Department Superintendent Greg Phillips in a statement.

“It is the quantity, not the quality, of the village water supply that has created an emergency condition,” he said. 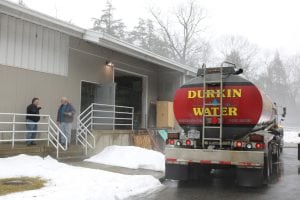 Tanker trucks brought water to Cold Spring on Jan. 12. At left are Greg Phillips and Scott Monroe of the Water Department. (Photo by Michael Turton)

While most village residents will see only a slight decrease in pressure, Phillips predicted that because the Haldane buildings, especially the high school, are at a higher elevation, they would likely have little pressure while the system recovered. He and Mayor Dave Merandy informed Superintendent Diana Bowers, who canceled classes.

When the village’s water storage tanks on Fishkill Road are full, pressure in the system is augmented by about 15 psi to reach properties at higher elevations such as the Haldane campus.

To increase flow from the village’s two main storage reservoirs, an outlet was opened on the Lower Cold Spring Reservoir along Foundry Pond Road. However, the water must travel 2.5 miles to reach the water treatment plant, so it takes about eight hours before the reservoir there begins to rise.

In the meantime, Merandy asked that everyone in the system use water sparingly for the next several days while it recovers.