‘The most difficult repair I’ve encountered’

Early on the morning of Tuesday, Jan. 2, with the temperature around 7 degrees and a major snowstorm predicted for later in the week, a leak was discovered in a waterline near Rock Street and Kemble Avenue in Cold Spring.

It took six village workers nearly three days and 111 collective hours to fix the break, working around the clock under terrible conditions. Superintendent of Water and Wastewater Greg Phillips recounted the effort as “the most difficult repair I’ve encountered in 20 years.” 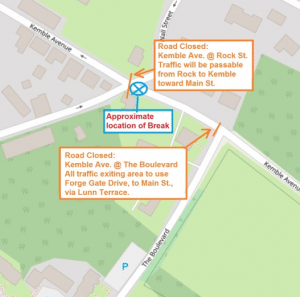 A village map showing the approximate location of the break.

2 a.m. Robert Downey Jr. of the Highway Department notices water on Kemble Avenue near The Boulevard. Scott Monroe of the water department notifies Phillips, who checks computerized monitors that indicate a leak of about 75,000 gallons per day.

8 a.m. Phillips, Monroe and Charlie Norton of the Highway Department meet at the site to evaluate the break.

10 a.m. A microphone called an aquascope is used to locate the leak. Mayor Dave Merandy is notified. Due to the 30-inch deep frost, a backhoe is not able to excavate, and village dump trucks are unavailable because they have already been outfitted for sanding and salting in anticipation of the storm. Highway Department workers are unavailable because they have just finished the overnight garbage pickup. A private contractor is contacted.

4 p.m. The leak affects 350 to 400 residents in about 100 households. Each household is contacted, as are Putnam County emergency and health officials; water is still flowing.

11:30 a.m. The initial aquascope reading that appeared to pinpoint the leak proves to be incorrect. The search moves to Rock Street, west of Kemble.

1 p.m. At the new site, additional equipment is brought in to break through the pavement and heavy frost. The pump hoses keep freezing. Heaters are employed to keep them operable and to give workers relief from the bitter cold. (During the repair, the temperature never rises above 29 degrees.) Residents are advised to boil their water for drinking and cooking. 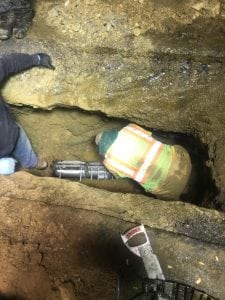 5 p.m. A HydroVac, which excavates with pressurized water and a vacuum, arrives from Buchanan.

5:40 p.m. An 8-foot-deep trench is finally excavated. Three small, decrepit water lines are discovered. They are more than a century old and it’s not clear if they still supply any homes. Some older waterlines have never been mapped. Over the next two-and-a-half hours, the three lines are clamped off at the 6-inch Rock Street main after it has been cleaned of corrosion.

8 p.m. While attempting to re-pressurize the Rock Street main, water is detected coming from the original trench, as well as from one of the old, clamped-off lines.

8:30 p.m. Just north of the original excavation site, a fracture is discovered in the 6-inch Kemble Avenue main, which lies on granite less than 3 feet beneath the road. (The typical depth of a main is 4 feet to avoid problems with frost.) The line cracked around its entire circumference, creating a 360-degree leak. 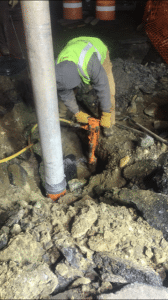 A jackhammer was needed to chip away granite under the cracked Kemble Avenue main. The vertical pipe is used to remove water, rock and debris from the trench. (Photo by Sal Pidala Jr.)

9 p.m. The Philipstown Highway Department lends the village a jackhammer to remove some of the granite.

10 p.m. After the bedrock is removed, workers apply a clamp. But a new issue surfaces: another of the old clamped lines is feeding water into the Rock Street trench, indicating it is connected to a main in another location. The old line is an odd size and the Cold Spring crew doesn’t have the proper fittings to repair it.

11 p.m. Phillips sends photos of the odd-sized line to John Pizzella, a contractor who is a 30-year veteran of the Peekskill Water Department.

Midnight. Pizzella arrives with the fittings and the repair is completed.

12:45 a.m. Slowly, water pressure is restored to the area. All the fittings appear to be watertight.

1 a.m. Over the next few hours, fire hydrants on Kemble Avenue, Constitution Drive and Forge Gate Drive are flushed under low pressure to allow air to escape and prevent damage to residential lines.

The Highway Department workers, including Ken Trimble and Zach Langer, backfill, set up barricades and lay steel plates, clean up the site and remove equipment and the detour signs. After little sleep, they return to plow during the snowstorm.

Testing of the water for bacteria is delayed due to the treacherous roads. The boil advisory is left in place.

9 a.m. Samples are sent to EnviroTest Laboratories in Newburgh for testing that involves a 24-hour incubation period.

5:39 p.m. The lab tells Phillips the water is safe. He informs the Putnam County Health Department, and the boil advisory is lifted.