A 52-year-old woman died on Thursday (Jan. 11) in a fire at the Stepping Stone Group Residence on Route 301 just east of Route 9 in Philipstown, according to the Putnam County Sheriff’s Department.

A call was made to 911 at about 11:50 p.m., and firefighters discovered a fire in a second-floor bedroom of the home, which serves adults with Prader-Willi syndrome. A resident identified as Michelle Galeno was found unconscious in the bedroom and taken outside to paramedics but pronounced dead at the scene. 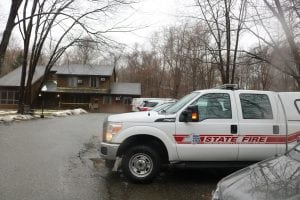 State fire investigators were on the scene on Jan. 12 (Photo by Michael Turton)

Nothing is more important to us than the safety and well-being of the people we support and our staff,” said Denise DeCarlo, a spokeswoman for the New York State Office of People, with Developmental Disabilities, which oversees the home. “We are fully cooperating with the ongoing investigation into this tragic event.”

She noted that two staff members were on duty at the home, which has six residents. The five other residents were not injured and have been relocated, she said. The agency is also providing grief counseling.

Prader-Willi is a genetic disorder that results in developmental disabilities. It also is associated with an excessive preoccupation with food and constant hunger, which can lead to obesity and related health issues such as diabetes.

In addition to sheriff’s deputies, emergency personnel from the North Highlands, Cold Spring, Garrison and Fishkill fire departments responded to the alarm, as did the Cold Spring police officers and paramedics from EMSTAR and the Philipstown Ambulance Corps.