Sharkey and the Sparks — which is Sharkey McEwen, lead guitarist for Slambovian Circus of Dreams, and his 14-year-old son, Ben — return to the Towne Crier Café in Beacon at 7 p.m. for a free show on Thursday, Jan. 18, following their packed debut there in November.

Ben began playing guitar at age 11, a year earlier than his dad had started. “There was always lots of music in the house,” says Sharkey (born Mark) of his childhood home in Davis, California. But he was more interested in astronomy than music, and recalls being fascinated by an oversized atlas.

Even in his 30s and 40s, he says, he found himself surprised that he had become a musician. Unlike many of his friends, he never had an epiphany that he wanted to make music but says that by age 15 he was playing pubs and colleges around Davis and eventually joined a band called Staggerwing. (“It was some kind of aircraft, I think,” he says with a smile.) By 17 he was playing professionally. 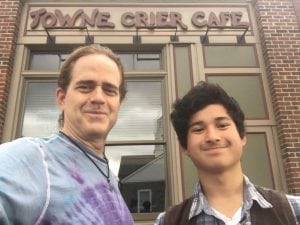 He moved to Los Angeles in his early 20s, teaming up with The NuKats, “a smart, nerdy, band” from Minnesota. “It turned out to be successful, which allowed me to go back to school and finally study theory and composition and take piano classes,” he says.

Sharkey says he had lots of musical ideas but “didn’t have anything to say lyrically. That led me on a kind of a spiritual path, which took me to a lot of places around the world. I ended up in New York, working in a music studio in Manhattan, and that’s where I met Joziah and Tink Longo,” his fellow Slambovians.

They hired him for their band, The Ancestors, after asking him to help audition guitarists and realizing he was the best candidate. They found a drummer and took the name Gandalf Murphy and the Slambovian Circus of Dreams.

Sharkey isn’t sure how the name came about. “Joziah was going to an art class, and he made a poster saying ‘Gandalf Murphy Presents,’ ” he recalls. “Gandalf also is a character in Lord of the Rings, and Joe was always saying ‘Murphy,’ as in, ‘Come on, Murphy.’ It also may have been inspired by a walk through the woods at Sleepy Hollow.

“Slambovian, I think, came from slammin’, like in ‘That was slammin’ as a reaction to something good being played.”

The name has since been simplified to Slambovian Circus of Dreams, but Sharkey admits it may not be the best moniker. “The Who, U2: short, memorable,” he says.

Joziah and Tink Longo moved to Cold Spring about 2005 and the McEwen family (which also includes Sharkey’s wife, Isho, and daughters Michelle and Ruby) followed a year later. Ben began playing guitar in the sixth grade, after being introduced to the instrument during a music class at Haldane Middle School. 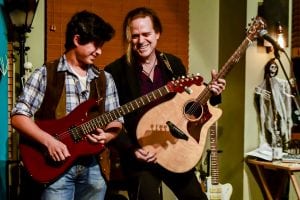 “My dad taught me the basics, then I branched out, looking up tabs, trying out riffs,” he says. Ben likes music from the 1960s, ’70s and ’80s but not the ’90s. (“He draws the line at that,” Sharkey says.) The teenager also loves to cook, tutored in the culinary arts, he says, by the “University of YouTube.”

Early in 2016, Sharkey began stepping outside the Slambovians in small ways.

“I started going to open mics,” he says. “My role has always been accompanying and doing background singing. Ben had been learning to play, in the meantime, so we started doing open mics together. Last year I ended up doing this journey to Peru, where I participated in a traditional Ayahuasca healing ceremony. The experience empowered me to branch out.” He calls playing with his son a “wonderful gift.”

“He and I had a blast,” Sharkey says. “I’ve been trying to help Ben play guitar, in particular with a pick. He surprised me by playing Misirlou, a surf song which you have to use a pick for. He’s got some ballast. He’s amazingly composed onstage. For me, it was like introducing Ben to the community.”

Last June, after father and son performed at a Towne Crier open mic, owner Phil Ciganer asked them to put together a set. They assembled 14 songs and debuted at the club to a full house on Nov. 3 that included many of Ben’s teammates from the Haldane track team. When the duo returns on Jan. 18, look for more Sparks to fly when Ben’s sisters join in.