The Vietnam Veterans Memorial Fund is building a “Wall of Faces” for a new education center at the memorial in Washington, D.C. It is collecting photographs of each of the 58,318 men and women who lost their lives in the conflict and whose names are engraved on the wall. See vvmf.org/Wall-of-Faces. 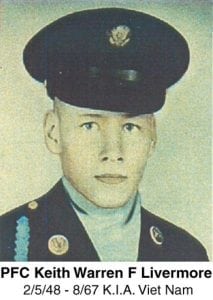 Keith Livermore of Garrison was killed in action in 1967

New York state lost 4,126 service members, including 12 from Putnam County and 38 from Dutchess County. Those whose digital memorials do not have photos are listed below; images can be uploaded through the Wall of Faces site. If a memorial already has a photo, the fund says it will also accept additional images.