The first time Diana Cruz saw her father in the U.S., she didn’t recognize him. “I had really only known him as a voice on the telephone,” she said.

It was November 2000, and Cruz and her mother had just come to the States to join their father, who had arrived a few years earlier. After settling in, she realized that there was something different about her family.

Eventually, she said, she realized that they were undocumented immigrants.

“I began to feel ashamed and inferior, and that I should never feel too comfortable here,” she said. She said hope finally came in 2012, when President Barack Obama initiated the Deferred Action for Childhood Arrivals (DACA) policy that protects from deportation people age 30 and younger who came into the country before they were 16 as long as they pass a criminal background check and pay a fee.

The future of DACA is uncertain. The policy, which was rescinded by President Donald Trump on Sept. 5, hangs in the balance of a looming government shutdown and budget crisis as lawmakers search for a compromise. There are 800,000 “Dreamers” in the program (named for a proposed DREAM Act that would grant minors conditional residency), including about 1,900 in the 18th Congressional District, which includes Philipstown and Beacon. 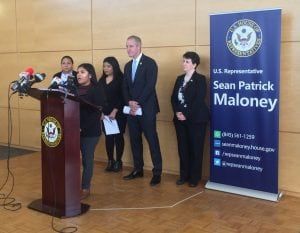 Aura Lopez Zarate speaks at a news conference organized by Rep. Sean Patrick Maloney (center) to address uncertainty about the DACA policy. (Photo by B. Cronin)

Unless a deal is reached, all would face deportation beginning March 5. The work authorizations and deportation protections of about 14,600 Dreamers have expired since Sept. 5. (They must be renewed every two years.) All permits will expire by September 2019.

Cruz shared her story, along with two other local Dreamers, Aura Lopez Zarate, a 2015 graduate of the Newburgh Free Academy, and Miriam Sanchez, a teaching assistant with Agri-Business Child Development, at a Jan. 16 news conference and symposium on DACAheld at SUNY Orange’s campus in Newburgh. Maloney made it clear at the conference that he will not vote for any budget deal that does not include protection for Dreamers.

“We do not blame children for things their parents do,” said Maloney, who is a Democrat. “These kids, who have played by the rules, who are going to school, who are working, who are serving in our military, who are contributing to our economy, have done everything right. That’s not an overstatement. By definition, that’s who is in the DACA program. Eight-hundred thousand people came forward and did what we asked them to do. Eighty percent of the American public knows this and supports making it possible for Dreamers to stay in this country and to continue to make contributions to our way of life.”

Maloney is one of 200 co-sponsors in the House of the Dream Act of 2017, which would grant conditional permanent resident status to DACA recipients for up to eight years. To qualify, applicants would have to have lived in the U.S. at least four years before the law’s passage and be enrolled in secondary school or graduated from high school. They could obtain lawful permanent residence by completing two years of higher education or military service or working for three years

Maloney said President Trump’s widely reported vulgar description of Haiti and Africa has made the problem worse. “This president manufactured a crisis and then made it worse by using racist and incendiary language at a critical moment when people were trying to cut a deal.” 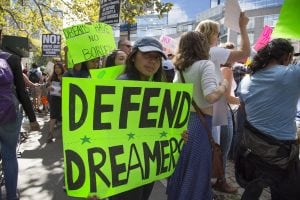 Cruz, who lives in Dutchess County, said that when Obama announced DACA in 2012, she felt she could stop being afraid.

“I felt unstoppable,” she said. “I’ve always had the drive, but now I had a work permit.” She finished high school in three years, earned an associate degree in three semesters, graduated from SUNY New Paltz with a double major in Latin American studies and international affairs, and is a graduate student at SUNY Albany’s Rockefeller College of Public Affairs and Policy.

Even if DACA is saved, it doesn’t solve the problem at hand. Cruz would like to see a path for Dreamers to become citizens. “Once we get immigration reform, that’s one of the things that will make America great again,” she said.

Maloney said that for that to happen, the president’s supporters need to make their voices heard. “People who voted for this president need to raise their voices right now for things that make sense,” he said. “I don’t know any Republicans here who talk the way the president talked last week. They don’t use racist language when they talk about people from Haiti or Africa. It’s time for people of good faith, who are watching the president and members of their own party saying things that are outrageous, they’re the ones that have to stand up and say ‘Wait, there’s work we can do together on this, but don’t say those things in my name.’ ”

Cruz said that although she doesn’t think she would end up targeted for deportation, if the worst should happen and she ended up in Mexico, she’ll take her talents and education to a country that would be proud to have her. “It’s a very large world and I’m sure there’s another country out there that would be willing to take me,” she said.