Delayed by snow for several days, the Philipstown Town Board on Jan. 11 kicked off 2018 by tending to a long list of routine yearly chores (e.g., setting the mileage compensation for using personal cars for town business at 56 cents per mile) and reiterated its support for efforts to fight global warming and the opioid crisis.

The board also dealt with Freedom of Information Law (FOIL) requests from Homeland Towers, whose application for a cell tower on Vineyard Road just south of the intersection of Routes 9 and 301 is pending before the town’s Zoning Board of Appeals and Conservation Board. 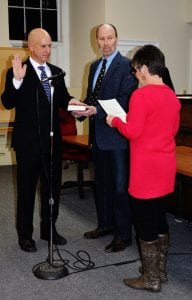 Before the Jan. 11 meeting, John Van Tassel (left) took the oath of office for his third, four-year term on the board. It was administered by Clerk Tina Merando, who was assisted by Supervisor Richard Shea. (Photo by L.S. Armstrong)

The actions came during the board’s annual reorganization meeting, which was followed by its formal monthly meeting, at Town Hall in Cold Spring. Both meetings had originally been scheduled for Jan. 4.

The board voted unanimously to pay Roberto Muller, coordinator of the Climate Smart Communities initiative, $500 a month, an increase of $100 over the monthly amount set in the 2018 budget. “I don’t care if I have to take it out of my own pay,” Supervisor Richard Shea said of the additional $1,200, although he added he believes he can raise the money from other sources.

Muller told the board that he had a large pool of volunteers, as well as 10 who would like to serve on a task force to oversee the initiative. Promoted by New York State, the Climate Smart program is designed to minimize the pollution produced by a municipality and maximize its ability to protect the environment and reduce global warming.

The board unanimously set the pay for a coordinator of drug prevention, treatment and recovery resources at $24 an hour, not to exceed $10,000 for the year. The position has not yet been filled.

The board unanimously approved an appeal from Robert Gaudioso, a lawyer for Homeland Towers, for some — but not all — of the documents he sought.

According to the Town Board, Gaudioso filed a FOIL request on Nov. 17 asking for the town government’s “entire file regarding Homeland Towers.” Ten days later, Town Clerk Tina Merando provided some documents but indicated that others might be available from various town offices and advisory boards and would be sent “if and when” she received them.

On Jan. 5, Gaudioso appealed to the Town Board, terming the response an “effective denial” of his request because it “failed to immediately provide all materials in the town’s possession,” including minutes and tapes of meetings, “e-mails received by the Zoning Board from residents,” and items pertaining to the town’s dismissal of its first radio-frequency consultant. (After hiring the consultant in mid-2017, the board decided last fall to stop using his services after learning of possible conflicts of interest regarding his involvement with the cell tower industry.)

The Town Board ruled 4-0 that the clerk should “forthwith” give Gaudioso copies of meeting minutes mentioning Homeland Towers or the Vineyard Road project but denied the request for tapes, videos, photos and notes “as such materials are not in the town’s possession or control.”

The town government contracts with a private firm to videotape select meetings and does not retain a photographer.

The board also agreed to supply Gaudioso with “all non-privileged emails and correspondence” pertaining to Homeland Towers, “without delay.” But it denied the request for materials relating to its parting of ways with the radio-frequency consultant, claiming “no such documents are in the town’s possession or control.”

Shea described the FOIL requests and appeal as “a shot across the bow” by Homeland Towers, whose representatives have clashed with ZBA and Conservation Board members and citizens. “To our knowledge,” Shea said, town officials have “given them everything we could.”

2 thoughts on “Town Board Pushes Ahead on ‘Climate Smart’ Status”