They might not have bothered for the field events. Jummie Akinwunmi of Beacon, a senior, won three of the six and her sister Ennie Akinwunmi, a junior, claimed two. The sole exception was the pole vault, in which neither competed (it was won by an athlete from Hendrick Hudson; Anna Manente of Beacon was second). 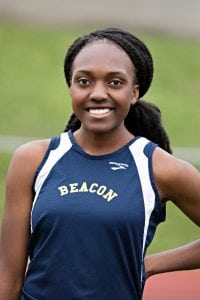 During her career as a Bulldog (she also plays volleyball), Jummie Akinwunmi has soared to great heights. She is ranked fifth in the state in the high jump with her personal and season best of 5 feet, 4 inches, which won her the league championship.

Her older brother encouraged Akinwunmi to pursue track and field, and she would compete with him to see who could win the most medals. She began the high jump in seventh grade and more recently added the long jump and triple jump. The high jump is her favorite, she says, although the triple jump has grown on her. 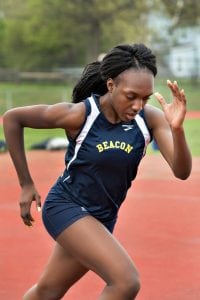 Asked about her preparation, Akinwunmi says, “I try to block everything out before my jump. I focus on one thing at a time, such as keeping my hips up.”

Akinwunmi is hoping she can reach 5 feet, 6 inches, before the season ends, which would mark the fourth year of a 2-inch improvement in her jump. “I would rather reach 5-6 and be fifth best in the state than be first at 5-4,” she says. “I want to know that I am getting better!”

She has done well in the classroom, as well, and is on track to be the class valedictorian at graduation in June. She has been accepted at Yale University with more acceptances expected. 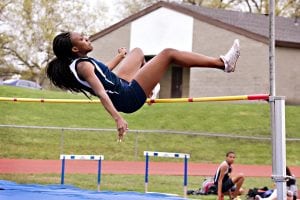 Balancing athletics and a challenging academic load takes discipline. Akinwunmi organizes her day in a planner, writing out her schedule in detail, including when to eat. She says her favorite subjects are math, calculus and geometry. She plans to attend medical school.

On meet days, she eats light, which she says makes her feel light for her jumps. She listens to Wale or Frank Ocean during her warmups. “I don’t know if it’s a good jump until I am above the bar,” she says. “Sometimes I think I know, if I keep my hips up long enough.”