Nine Philipstown boys and girls will advance to the district tournament on Feb. 16 after winning the local Knights of Columbus Free Throw Championship on Jan. 11 at the Capuchin Gym.

Twenty-five students participated in the competition, sponsored by Loretto Council No. 536. Each shot 15 free throws. 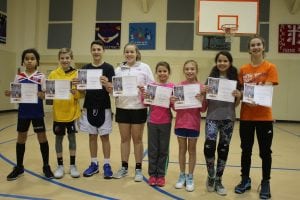 Among the 9-year-olds, Marisa Peters made five to take the girls’ title and Bryce O’Halloran made eight to lead the boys. Among the 10-year olds, Morgan Murphy won with three and Brody Corless with four.

Marisa Scanga won the 13-year-old girls’ bracket with seven and Dillon Kelly was best among 14-year-old boys with 11.