Perhaps because she began her artistic career as a photographer, Anna West has always been at ease documenting her oil paintings with a camera.

She’s been less comfortable with the world of galleries and the negotiations required to consistently show in them. Then she discovered Instagram.

“I used to have shows, and I sold a bunch of paintings that way, but that’s only once a year,” she says. “Now I have a goal to sell a painting every month.” 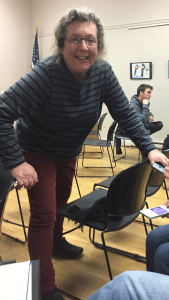 Anna West during her talk at the Howland Library (Photo by A. Rooney)

On Jan. 18, West presented a well-attended, illustrated talk at the Howland Library in Beacon on what she has learned about selling art through social media.

West immediately debunked the notion that it’s a numbers game.

“You don’t have to have thousands of followers,” said West, who has 680. “It’s about having the right people looking at what you post.”

She advised artists to create a business account as she did (instagram.com/annawest.painter) distinct from your personal one, “or you won’t be taken seriously.” Try to post daily for a month to establish baseline numbers. “Even if you’re posting something unfinished, get something up there, just to keep people ‘liking’ it,” she said.

Gathering “likes” on your posts, it is hugely dependent on visibility, West said, and that means where and when the post shows up on the platform. How to get that visibility? In addition to adding “hashtags,” or key terms, to the posts, it’s about being diligent in reacting to those who are reacting to you, she said.

That means, at a minimum, liking all the comments and going to each person who has liked a post or comment by you and doing the same for them, save for the fake identities created through apps, which are easy to spot.

“Click the little hearts next to the comments; acknowledge them,” West said, adding that updating whom you follow is important, too, especially because what goes around, comes around. “You want active followers; that helps with boosting visibility on both sides.” 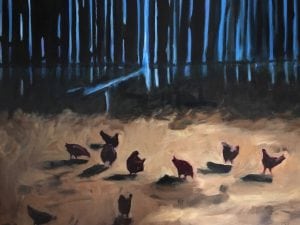 Contests, featuring a giveaway of your product or art to those who repost and share the post, are a good way of raising visibility and increasing followers, West said. It’s also crucial to repost to other social media platforms, such as Facebook, Twitter and Tumblr, which is easy through Instagram.

Stressing that less is more, West emphasized that “you don’t have to be a good writer. You don’t want a lot of text on your Instagram page; it’s all about the image and the hashtags.”

Most sales are done through private messaging. “People might ask about the cost, and then you can just direct them to messaging,” she said. “The great thing about Instagram is that you don’t have to do the sales hustle: they have found your painting, you give them the price and they decide if they want it, and payments are usually made through PayPal or Venmo.”

West began her career in the San Francisco Bay area, playing in and photographing punk bands. After she moved to New York City in the mid-1980s, she taught photography and darkroom techniques to support her ventures, which included a lot of traveling. West switched to oil painting and creates landscapes from her travels but also works on multiple images of items that catch her fancy, from chickens to chairs to surfers. 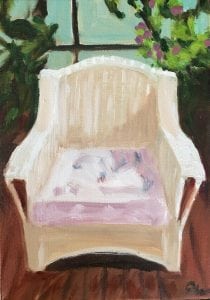 The non-abstract nature of her pieces makes them easier to promote through hashtags, those thickets of crosshatching which produce head scratching in many new to social media. West spent a good portion of the presentation deciphering them.

Hashtags are short descriptions such as #chairs or #relaxingonasummerafternoon that might be attached to an image of a deck chair on a patio. They act as hooks to draw in followers of the subjects.

West said it’s important with hashtags to combine the common with the unusual, because each has its pitfalls. Say you do the generic #chairs. Your post will wind up on a page with hundreds of #chair posts. A more unique hashtag may be seen by far fewer people, but with far less competition for space, it will likely occupy a top spot on the results page for quite some time.

“It’s strategic,” West explained. “You have to be playful and create hashtag varieties, like #chairart, #chairlove, #chairaday. You might want to place an additional object in the picture so you can add hashtags. For example, #forkandrose. These all help in not having your post disappear after a day. 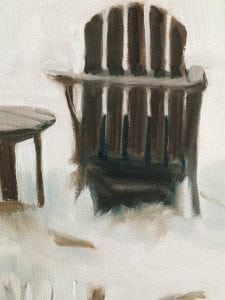 “I also take down my posts if I don’t have at least 20 likes in the first hour,” she added. “I can tell those are going nowhere and I need to rethink.”

West recommended forming what she calls “pods,” which are groups of friends and followers who hashtag, comment on and like each other’s posts. As part of the session, West asked attendees to break off into pods to connect and strategize.

If this all sounds arduous, it’s simply a new way of doing business, according to West, and an opportunity for those willing to put in the effort to create income and/or greater visibility for their creative output.

“Once you make it a habit, doing it every day for, like 15 minutes, it becomes pretty easy,” she said. “It’s a job, a different one than preparing work for a gallery, and it’s been worth it for me.”