Four months ago, Frank Skartados, who represents Beacon in the state Assembly, was visited in his office by Lauren Mandel, a Newburgh nurse whose son, Zane, had just died from an opioid overdose. Their conversation led to a forum held at the Newburgh Armory Unity Center on Jan. 20 in which a diverse group of panelists discussed the crisis and the practical things that can be done to save lives.

The panelists agreed that the opioid problem needs to be addressed as a public-health issue. Jeff Kauffman, a former police officer and attorney with the New York Police Department, said that returning to the days of “the war on drugs” would be a mistake.

“I’m the living history of the failure of the drug war,” said Kauffman, a member of the Law Enforcement Action Partnership. “The fact that I’m here dealing with the same problems that I’ve been dealing with for the past 35 years is no accident.

“If we attack this in a more policy-oriented way, to prevent the involvement of the criminal justice system, not only would more treatments be available, but as a society we can figure out how to deal with this problem in a way that does not stigmatize users and future generations,” he said. 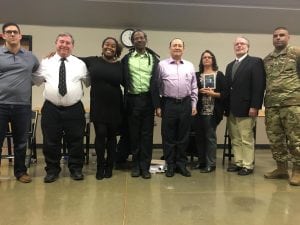 Carl Hart, chair of the Department of Psychology at Columbia University, pointed out that many users overdose because they mix opioids with other substances such as alcohol, antihistamines or a benzodiazepine such as Xanax or Klonopin. Educating users about this risk would be a simple way to reduce fatalities, he said.

Similarly, heroin may be mixed with substances such  as fentanyl, a painkiller whose lethal dose is the size of a few grains of salt. Hart said some countries have free, anonymous services that will analyze drugs for users so they know what they’re about to consume. “There’s always risk, but these things would make the risk-safety ratio more favorable,” he said.

Frank Barone works for a syringe exchange program run by Hudson Valley Community Services that operates in Newburgh, Kingston, Poughkeepsie and Monticello. It provides single-use syringes, as well as safety containers so used needles can be returned for disposal. The service also connects users to treatment and rehab facilities and hands out water and snacks. “Sometimes that’s the only thing they get to eat all day,” Barone said.

Critics argue that syringe exchanges promote drug use, but Kassandra Frederique, state director of the Drug Policy Alliance, doesn’t see it that way.

“You have to love people past the point of your comfort,” she said. “If someone is struggling with addiction, do you want them to also catch a blood-borne illness [such as HIV]? And how do we connect people to the resources that they need? You don’t know what’s going to be the thing that clicks for someone. You could be using a syringe right now, but two seconds later, you’re done and thinking ‘I want to talk to someone about not using anymore.’ And you can get connected to someone right there” at the exchange.

“People are addicted to this idea that you have to use tough love, let people hit rock bottom, kick it cold turkey,” she said. “That works for some people. It kills others.”