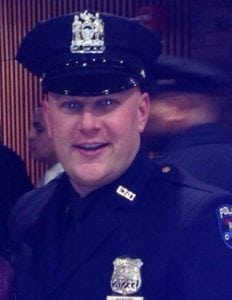 Nicholas James Budney, 36, a New York City police officer who lived in Rock Tavern and grew up in Cold Spring, died Jan. 27, 2018, in Newburgh. Police said on Jan. 31 that his death had been ruled a suicide.

Nicholas graduated from Haldane High School in 2000 and attended SUNY Plattsburgh and John Jay College of Criminal Justice. On Jan. 10, 2005, he graduated from the New York City Police Academy and was assigned to the 47th Precinct in the Bronx. He was a member of Special Operations, named Officer of the Year four times and assigned to Emergency Service Unit Truck 3.

He also was a member of the North Highlands Fire Department and named fireman of the year. He enjoyed cooking, gardening and woodworking. He loved being Irish and was loud and proud to be an Irish American.

On April 13, 2013, he married Shannon Sheehan at Our Lady of Loretto Church in Cold Spring.

A Mass of Christian Burial was celebrated on Feb. 3 at Our Lady of Loretto, with interment at Cold Spring Cemetery.

Memorial donations may be made to the NYC Detective Endowment Association Widows and Orphans Fund, 26 Thomas St., New York, NY 10007.

Information provided by the Clinton Funeral Home and news reports