The governor outlined his agenda in his State of the State Address and draft 2019 state budget, which he unrolled in presentations throughout January.

The proposed budget calls for state spending of $168.2 billion; about 60 percent would come from state operating funds and the rest from capital and federal sources. The operating fund share, $100 billion, is 2 percent higher than for 2018.

The Legislature must approve the budget and can change it before adopting a final version. 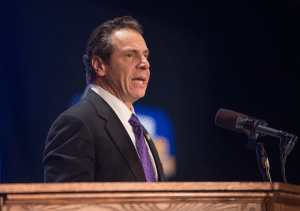 Gov. Andrew Cuomo delivers his State of the State Address in Albany on Jan. 3. (Photo by Mike Groll/Governor’s Office)

The governor said his proposed budget would continue the state’s progressive practices while “protecting taxpayers against the federal assault” of a change in tax laws that capped the deduction for state and local taxes at $10,000 annually for those who itemize, which analysts say will have a greater effect on residents of high-tax states such as New York than those elsewhere.

Cuomo said New York is exploring “restructuring options” to balance the scales, including use of charitable contributions to support government and reducing state income taxes by making them employer-paid instead of employee-paid. Despite the upheaval, he said the state continues to phase in tax cuts that, when fully implemented, will drop the rate from about 6.5 percent to 5.5 percent for those earning $40,000 to $150,000 annually, and from 6.6 percent to 6 percent for those earning $150,000 to $300,000.

The draft budget provides $26.4 billion in school aid, an increase of $769 million. Likewise, it earmarks $6 million for science and engineering education and $5 million in reimbursements for courses in science, technology, engineering and mathematics (STEM).

The budget allocates $186 million, up by 3 percent, to reimburse private schools for the costs of meeting state mandates. It also allots them $5 million for STEM classes.

With $7.5 billion in spending proposed for higher education, the budget continues an upward trend begun in 2012. Cuomo also called for measures to protect students from abusive lending practices and to prohibit the suspension of professional licenses from graduates who fall behind on student loan payments.

As part of his budget proposal, Gov. Andrew Cuomo called on the Legislature to:

The governor proposed a surcharge of 2 cents per milligram of opioid ingredients in prescription drugs, with the revenue spent on opioid-abuse prevention and rehabilitation services. Moreover, his draft budget set aside more than $200 million to fight opioid addiction and increased funding for the Office of Alcohol and Substance Abuse Services by $26 million.

Cuomo proposed $11.7 billion for infrastructure improvements, such as rehabilitating 500 bridges, paving 2,000 miles of roads, completing the Mario Cuomo Bridge at Tarrytown and making repairs to the New York State Thruway.

Separately, Cuomo expressed hopes that  a Metro-North train station could be built at the Woodbury Common shopping complex in Central Valley.

Cuomo proposed expanding prohibitions on gun possession by those convicted of domestic violence, including certain misdemeanors, or named in an order of protection. Under current law, a judge can order a person to relinquish his or her handguns; the governor’s idea extends the ban to rifles and shotguns as well.

In 2017, Dutchess County submitted a 59-page plan outlining $27 million in potential savings from 37 projects. But Putnam County did not participate. Its county executive, MaryEllen Odell, said in January she would start the process anew.

The draft budget calls for $2.5 billion to protect water sources and assist with water infrastructure projects. It further proposes $39 million for solid-waste control; $176 million for state parks and recreation, including capital projects (and $900 million overall by 2020); $154 million for open-space programs, $21 million to address climate change; and $65 million to eradicate algae in lakes and ponds that provide drinking water or attract tourists, including Lake Carmel and Putnam Lake.

Cuomo also emphasized the state would sue the federal government if the Environmental Protection Agency adopts an “indefensible” stance and allows General Electric to stop dredging the Hudson to remove the pollutants, known as PCBs, it dumped into the river. He said “overwhelming evidence” indicates more needs to be done.

Cuomo’s draft budget and other documents can be downloaded at budget.ny.gov.

One thought on “What the Governor Wants”