Ski Magazine had called the American Parallel Technique “the best system ever devised” to teach novices how to ski. The system’s creator was Austrian-born Walter Foeger, who had been invited to join the staff of Beacon’s Dutchess Ski Area as executive vice president in the winter of 1969.

His task was twofold: (1) make Mount Beacon competitive with other big-market ski areas in the East, and (2) start an instructional school that would attract novice skiers from the metropolitan region.

Foeger had earned praise for his design of ski areas such as Jay Peak in Vermont and Camelback in Pennsylvania. His “snowplow-less” instruction of the American Parallel Technique guaranteed a newcomer to the sport would master parallel skiing or get his or her money refunded. With Foeger on board, the Dutchess Ski Area was set to become the fourth largest in the state.

Over the next few years, trails were cut on the mountain, including a 3,100-foot, double chair lift to the summit. At the base, Foeger supervised the construction of a 350,000-gallon holding pond to ensure sufficient water for snow making. His Commuter Ski School attracted at least 500 students annually for the 10-week course. 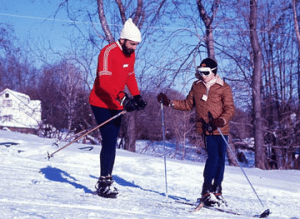 An instructor and student on Mount Beacon (BHS)

But even Walter Foeger could not overcome what fate had in store for Mount Beacon in the early 1970s: warm winters with little snow. Though there were a few good days (3,000 lift tickets sold), the ski area went bankrupt in 1975.

“Skiing is a mosaic — many little pieces put together,” Foeger once wrote. “If they are put together right, they form a beautiful picture.” All that remains are beautiful pictures of what once was the dream of a Dutchess Ski Area. You can see some of them in an exhibit created by the Beacon Historical Society at the Howland Public Library, 313 Main St.

The historical society’s latest acquisition is a building-blocks toy manufactured in 1922 by the Bookie Blox Company of New Rochelle. The toy, which consists of a set of seven hinged, painted wood blocks, was donated by Beacon business owner Brenda Murnane, who bought it in an online auction. Known as “Bookie Blox,” it was invented by Charles Douglas Fisher, who moved his toy factory to Beacon about 1925 and renamed it Toy Krofters. 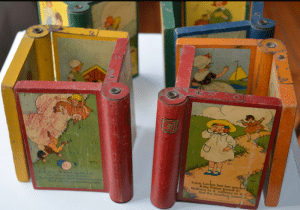 The Wisconsin native had two sisters with creative talents equal to his own. Lola Fisher was a Broadway and film actor who died at a young age of tuberculosis. Blanche Fisher Wright Laite was an illustrator who created the drawings in the classic children’s book, The Real Mother Goose, published in 1916.

It was the paintings of nursery rhymes by Blanche (signed “BFL”) that set Bookie Blox apart. Each hinged block contained four of Blanche’s whimsical scenes of nursery rhymes. Children could stack the blocks into a variety of shapes while learning their letters and rhymes through Blanche’s paintings. 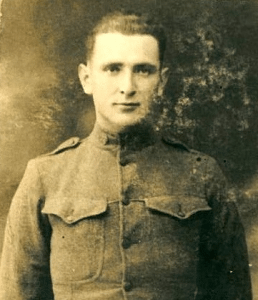 Toy Krofters, located in the top floor of the Jackson Carriage factory at 380 Main St., manufactured high-end toys until 1930. Besides the Bookie Blox, the historical society has two other toys the firm made: a Tudor dollhouse and a “Bookie Reel,” both on display at the society’s new home at 17 South Ave.

Put a penny in the meter for 12 minutes or a nickel for an hour. That’s how much it cost to park on Main Street in 1953. On June 1 of that year, the latest rage in city planning — control of parking in the business district — had come to Beacon with the installation of hundreds of Park-O-Meters on Main Street.

The coin-operated devices were manufactured by the Magee-Hale Co. of Oklahoma City, which sent an agent to Beacon in May 1953 to lay out spaces of 22 feet per car in the metered zone. The city spent $31,000 (about $280,000 today), paid in installments, on the system. 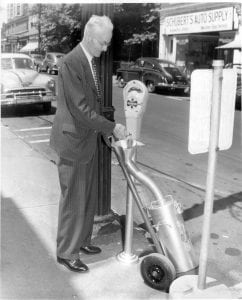 Police Chief Jesse Dingee empties the coins from a new “Park-O-Meter” on Main Street in 1953. (BHS)

If a cop spotted a red flag on the meter, it meant a fine of $1 … not a cause of endearment for local motorists. In their first week of operation, 28 meters were vandalized with gum, candy, toothpicks and Popsicle sticks. Business owners were not sure what to make of the meters: Did they keep traffic flowing, or did the threat of a ticket drive away customers?

In the end, the pennies and nickels (and $1 fines) added up. After a year, the meters produced $28,032, a jingling success for the city’s finances and nearly its entire return on investment.

On Nov. 15, 1945, the long wait for the end of World War II was over and veterans’ organizations hung a banner across Memorial Hall that read “A Good Job Well Done” to welcome home its soldiers.

On that day, one serviceman returning to Beacon staged a more spectacular display: He buzzed Main Street in his Navy Hellcat fighter plane at treetop level, bringing a storm of complaints to the police station. 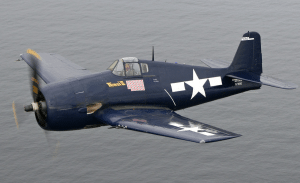 “Flying so low that its passage caused treetops to shake, the plane swooped over Main Street and the east end of Beacon,” reported the Beacon News. The nerves of one veteran, who had suffered through strafing by planes in Germany, were “not good and he was ill for several hours after.”

George Atkinson, a member of the Beacon Historical Society, was an eyewitness and remembers the plane coming down Main from the river side and passing close over his head. It then banked as it climbed toward Mount Beacon. The pilot came back to buzz Washington Avenue, narrowly missing the rooftop chimneys. 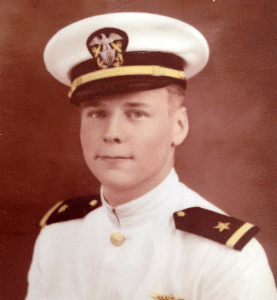 It can now be revealed (as disclosed by George Atkinson and others) that the pilot was Lt. Claud “Fuzzer” Adams, who spent three years in the Naval Air Corps. Adams had taken off from Floyd Bennett Field on Long Island intent on flying to Beacon and over his parents’ home on Washington Avenue. Adams avoided the chaser planes from Stewart Air Field in Newburgh by hedgehopping down Route 9 and under the Bear Mountain Bridge. 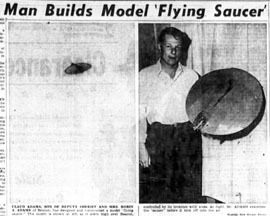 In 1950, Adams again made news by flying a model Flying Saucer over Beacon. Using wires for control, Adams flew it 70 to 110 feet high, creating another stir.