I can’t count the times I’ve made a fool of myself for love. Not because there are so many, but because in order to count them I have to recall them, and I can’t get past the first one without feeling such acute, wincing embarrassment that I have to stop and take several deep breaths to carry on with my day.

I can, however, vividly recall the handful of times when someone risked their pride for me. When I think back on those sweet-silly gestures, I don’t feel disdainful or judgmental. On the contrary, I’m filled with enormous tenderness and gratitude that someone was willing to put their heart on the line.

But there you have it: We carry around memories of our own failed romantic deeds in bashed-up, fetid suitcases, and others’ in velvet boxes. 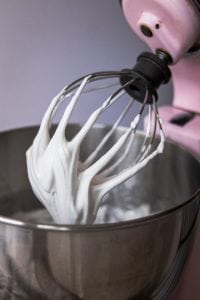 Of course, not all grand-heartbreak fiascoes are motivated by romance, unless by romance you mean “a quest that involves bravery and strong values,” as LiteraryTerms.net puts it.

Last summer, a hapless cook I’ll call V embarked on such a quest. V worked in one of the summer camp kitchens I oversaw. For the summer’s celebratory feast, she decided to make Baked Alaska — for 200 people. She talked it up for weeks beforehand not to the campers (it was a surprise for them) but to every other staff member she could buttonhole to hear her vision.

And what a vision: Snowdrifts of meringue piled in glorious swoops atop a mountain of ice cream stacked high on a massive pedestal of chocolate cake. Once the meringue was toasted (with a welding torch), the whole shebang would be wheeled — wheeled! — into the dining hall, doused in spirits (V’d gotten permission from the director to use alcohol) and lit on fire.

I asked V if she’d ever made Baked Alaska. She hadn’t. “How hard can it be?” She had studied the recipe and watched a YouTube video.

You know where this is going. I did, too, but swallowed my doubts and offered pointers: Make the cake two days ahead and freeze it hard; add the ice cream, then re-freeze overnight; do the meringue at the last minute. It was summer, after all.

V nodded but didn’t appear to be listening.

What could I say? I, too, have nurtured a Baked Alaska fantasy ever since I tasted one at my cello teacher’s house in Muncie, Indiana, when I was 13. The misery of perspiring through my sonata was redeemed by the most magnificent dessert I’d ever encountered: warm, toasted meringue enveloping cold peppermint-stick ice cream atop chewy brownie. Since then, I’ve often recalled that absurdly wonderful dessert but never had the courage to make one.

I was not at camp when the celebration occurred, but ran into her later.

According to eyewitnesses, the cake was still warm so the ice cream melted on contact. The meringue broke (spongey icebergs of overwhipped egg white atop a watery slop), so a team was dispatched to procure a case of marshmallow crème from another camp. Back in their kitchen, it slid off the ice cream and slumped in a sticky puddle at the base.

By this point, the campers had been waiting a half-hour for dessert. At last, V rolled the mess into the dining hall, where the director poured one bottle and then another of high-proof liquor over it. Numerous lighters were held to its surface, but the Baked Alaska never caught.

All of which makes Baked Alaska the ideal dessert for Valentine’s Day, a holiday powered by the notion that romance can be willed into being. It can’t, any more than a dessert can be baked from dreams. But to play it safe, I made mine in teacups (ramekins would also work), because one thing I’ve learned is that failures and desserts are best in small doses.

And what a vision: Snowdrifts of meringue piled in glorious swoops atop a mountain of ice cream stacked high on a massive pedestal of chocolate cake. 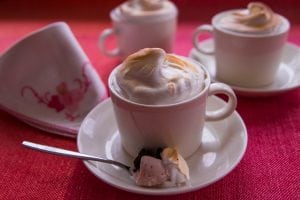 Temptation in a Teacup (Photo by Henry Weed)

Temptation in a Teacup


Prepare the cake according to recipe. When cool, press an overturned teacup or ramekin gently into the cake’s surface to mark circles; cut out and press one circle into the bottom of each cup; if your cups are deep, cut up the remaining scraps of cake to make a crumbly second layer. Transfer cups to the freezer and freeze for two hours.

If your freezer is very cold, transfer ice cream to the refrigerator for about 30 minutes, or microwave for 20 seconds, to soften slightly. Remove cups from freezer, and place a scoop of ice cream in each, flattening gently. Return to freezer.

Prepare the meringue: Fit the whisk attachment onto your electric mixer. In the mixer bowl, whisk together the egg whites, sugar and cream of tartar. Using a pot that will accommodate the mixer bowl without allowing it to rest on the bottom (i.e., an improvised double-boiler), bring 3 to 4 inches of water to a boil. Reduce to a simmer, and set the mixing bowl over the water, whisking constantly. Continue to whisk the egg white mixture vigorously until the sugar is completely dissolved and the egg whites are hot. (I usually burn my finger to find out, but a spoon could also work.) Transfer the bowl to your mixer, and whisk on slow, then medium, for about 5 to 7 minutes total until the meringue is glossy and holds a peak when you lift the beater. Add the vanilla and mix just until combined.

Turn on your broiler; set rack toward the bottom of the oven. Remove the cups from the freezer, and arrange on a baking sheet. Scoop a generous dollop of meringue onto each cup, swirling as you go. When the broiler is hot, place the cups in the oven and toast the meringue, watching constantly and rotating the pan frequently, until all the meringues are golden. Serve at once.

Adapted from The Gourmet Cookbook, by Ruth Reichl