Michael Seibert of Beacon, who with his partner on ice, Judy Blumberg, was a five-time national champion in ice dance, competed in two Olympics: in 1980 at Lake Placid, where the pair finished seventh, and 1984 in Sarajevo, where they were fourth.

Today, Seibert runs an interior design business and is a real-estate agent for Houlihan Lawrence in Cold Spring. Alison Rooney, who profiled Seibert for The Current in 2016, spoke with him about the sport of figure skating, which will be on display at the Winter Olympics in Gangneung, South Korea, starting Friday, Feb. 9.

How are figure skaters able to keep completing more difficult jumps?
There always seems to be a leader who masters the next level and, once that bar is set, in the minds of his or her competitors it can be done. So that creates a new level. It moves fast. Brian Orser was the first male skater to master the triple axel in 1984 and by the next Olympics if you didn’t do one, you were not going to be able to win. Now Nathan Chen is planning four or five quads. If you can only manage one, I wouldn’t think that can be a podium skate. Dorothy Hamill in 1976 did a double axel, no triple, yet when I’m in the rink with the kids I teach, the intermediate-level skaters are attempting triples. 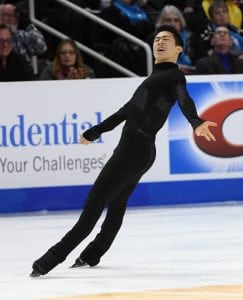 The sport has been declining in the U.S. but growing in Asia. Why is that?
The rise of “celebrity champions” sparks interest in youngsters in the country the stars are from. I was among the first skaters to do the first full hour of ABC’s Wide World of Sports, from Beijing, in 1979. They had never seen skating before, but they have had many champions in the decades since. China is a power, and Japan, as well. 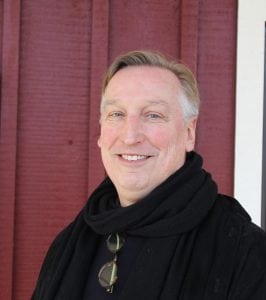 Michael Seibert (Photo by A. Rooney)

What to Look for on the Ice at the Winter Olympics

This year’s Olympics should be especially exciting in three of the events, with the gold medal coming down to who can deliver on that night’s performance. That is unusual in skating, as there is usually one competitor who dominates.

With the men, it is all about the quads, which are jumps with four or four-and-a-half revolutions: Who will land them and how many will they will include in the program? American Nathan Chen is certainly in the running. He has delivered on his promise during the fall competitions. His skating is a straightforward presentation of the jumps and ability to skate. He’s not wrapped up in crazy theatrical packaging.

Japan’s Yuzuru Hanyu hasn’t been seen because of injury. If healthy and in good form, he will be a contender, as will Javier Fernandez of Spain. Hanyu has a long list of quads but how many he will incorporate is unknown. Fernandez is known as the polished presenter and interpreter, and he will be challenged by the excitement generated by the arsenal of quads the other two can do. This is not to say he doesn’t deliver. It all comes down to who stands up on the night.

Ice dancing is another toss up, led by the French team of Gabriella Papadakis and Guillaume Cizeron and the Canadians, Tessa Virtue and Scott Moir, who won gold in 2010. Mistakes can’t be overlooked when the two top teams are so competitive. The Canadians would seem to have the advantage in the short dance and the French in the long, which is worth more in the total but also has more places for error. The twizzles, when the skaters spin on one foot while gliding across the ice, can take their toll.

The newly minted American champions, Madison Hubbell and Zachary Donohue, also could be on the podium, which could give their coaching staff of Marie-France and Patrice Lauzon a trifecta because they train all three teams from their base in Montreal.

Again, it’s all about the night of for the women. The reigning champion and expected winner, Yevgenia Medvedeva, had an injury this fall and lost the European championships to a younger Russian, Alina Zagitova. I expect the Russians to be first and second but in  which order is the question mark.

Medvedeva has had six weeks to heal and train, so I suspect she will be on her A game. Though the new U.S. champion, Bradie Tennell, has less experience on the world stage, her jumps and poise have been consistent and she seems to skate with joy. The pressure of the Olympics usually brings some surprises.

The fourth event, pairs, seems to have evolved into a new acrobatic place and they have yet to master the quad throws so the event feels slightly dangerous. It also tends toward movements that are physically difficult, particularly the entrances and exits of the lifts, though not necessarily musical or attractive.

Because Russia was banned from the Games, its skaters will be “countryless” during competition. Do you think that will affect them?
The Russians I know are very patriotic. If anything, I would expect them to rise above their normal level of excellence to make their homeland proud.

Has doping ever been an issue in skating?
Very little to none.

With current judging, is technical prowess valued more than artistic expression?
There is a move afoot to add a separate artistic medal. I’m not sure about that. I often don’t understand what is being judged as artistic. The programs sometimes look to me like bad theater. 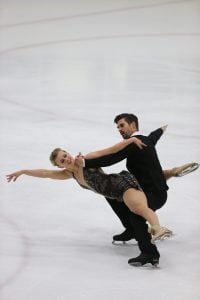 What is one of the trickiest jumps to master?
Skaters seem to excel in a particular jump, for no specific reason. Orser could do triple axels, yet it seems to be one of the weaker jumps for Chen. But Chen is a master at quads, which I doubt Orser ever tried. Brian Boitano could do triple jumps but did not do quads. The difference with the axel is that you take off facing forward while all the other jumps you start backward. What makes each jump unique is the various edges of takeoff: right or left foot, inside or outside edges. That is the basic understanding of what makes a loop, lutz, salchow.

In creating a program, who determines the music and choreography?
The choreographer, whose job is like being a director. The best programs I’ve made have been collaborations. While I can bring music and costumes, I need a buy-in from the skater. It has to be his or her vision.

How does a skater end up as a single versus pairs skater, or an ice dancer?
It’s usually what they are exposed to at a young age. When I started skating, I was considered older and it happened that one of the coaches was stronger in dance. Like most things, teachers make such a difference. 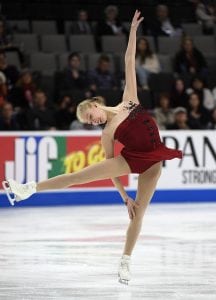 What do coaches whisper to the skaters just before they head out?
“Do it like you do in practice.” Everyone at the Olympics is capable of winning; it’s all about who delivers. Keeping your head in the game, as they say, is huge.

What goes through a skater’s mind after a disappointing performance?
It is hard to process when you fail in a performance that counts. Sometimes with the Olympics, there is not going to be another chance. So, there can be a longer “fog” afterward, and it happens to young people who have known mostly only their sport. They have to move into the larger world, and skating in particular is not a college sport, so I think it is harder.

How do male skaters get in and out of those one-piece, formfitting costumes?
There are zippers all over the place!