A small earthquake struck about 4 miles below the Highlands at 6:14 a.m. on Wednesday (Feb. 7). More than 280 people reported the quake to the U.S. Geological Survey (USGS) at earthquake.usgs.gov. 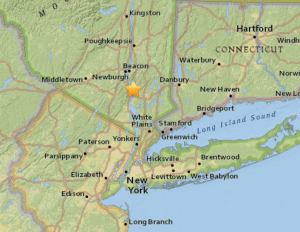 The origin of the earthquake that occurred on Feb. 7, according to reports to the USGS.

The 2.2-magnitude quake was centered near Crofts Corners, according to the Lamont-Doherty Cooperative Seismographic Network, which helps track the many quakes that occur below the surface each day. Most are recorded by highly sensitive instruments but not noticed at ground level.

The last “micro earthquake” to be felt in the Highlands occurred at 10:46 a.m. on Saturday, July 5, 2014, off Route 403 in Garrison. It measured 2.4-magnitude and also occurred about 4 miles underground. One Cold Spring resident described it at the time as feeling and sounding like a large truck rumbling by.

According to the USGS, “moderately damaging” earthquakes strike the New York-Philadelphia-Wilmington corridor roughly twice a century, and smaller earthquakes are felt every two to three years.

7 thoughts on “Yes, That Was an Earthquake”