The conversation was flowing freely at the January meeting of the Highland Photographers’ Salon at the Garrison Art Center.

The seven photographers at the get-together peppered each other with questions and comments.

“Do you have a primary lens?”

“What number, on the gourds?”

“Are you bracketing with aperture? Bracket with shutter and you won’t have any problems.”

“Can I ask what paper you’re printing on?”

The salon began last April through the efforts of Christine Ashburn of Cold Spring and Erin Wik of Garrison, who are both professional photographers. The January session attracted three other seasoned photographers, along with a dentist and a house painter/wallpaperer.

The salon was inspired by one that Wik attended in Woodstock after she decided to pursue photography as a career in 2011. She grew up in Garrison and remembers asking for the latest point-and-shoot camera at every birthday. She apprenticed at Coco B. Sweet Photography in Beacon for a year before launching a “lifestyle portraiture” business.

Ashburn began her career in photography 10 years ago in the darkroom at the art center and “turned pro” about five years ago. Her clients include Chronogram and Hudson Valley Magazine, and in 2014 the Hudson Highlands Land Trust published a collection of her work called Connecting: The People and Places of the Hudson Highlands. 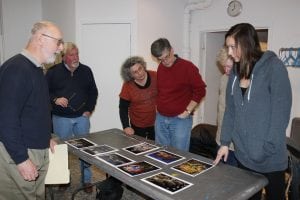 David Nicholls (left) responds to a question from Erin Wik (right) about his photography. (Photo by A. Rooney)

Anyone, at any level, is welcome to attend the salon, share his or her work in print or digital form, and to offer comment, constructively.

“Be respectful in giving opinions; this is a chance for people to grow,” Ashburn told the group in January.

David Nicholls’ photos were taken mostly during his annual holiday visit to his native England. “I’m trying to get beyond the documentation side of architecture,” he said. His passing mention of ON1, an image-processing software, led to a discussion comparing it to others.

For Jack Gish, it’s all about tugboats, a natural subject for someone who sees them pass regularly by his Manitou home. “I have an app which allows me to identify when one is coming, where it has come from and where it’s going, as well as its history,” he explained.

Mark Vrzala said he shoots “anything but screaming kids. This is my weekend; I’ve enjoyed art since I was little. When I get into shows, it’s a nice feeling when someone likes something and wants it on their wall.”

Nancy Faulds’ journey began with classes at the Putnam Arts Council in the 1990s. She also belongs to a Digital Discussion Group in Mahopac. Her subjects are landscapes and architecture, particularly abandoned buildings, some of which she visits with a group called Abandoned America.

The Beacon Photography Group hosts an annual show of its members’ work at the Howland Public Library. Its 300 members share and discuss images at facebook.com.

“I’ve been trying to figure out a way to make money from this,” she said. “I haven’t been successful in that yet but have been in some juried shows.”

Craig Watters went to school to study photography, then worked in commercial photography, largely marketing and advertising-oriented, in particular catalog work for the automotive industry.

“There was crossover between technically proficient and creative work,” he said. “I’m more on the technical side, but this turned out to be niche work. Then digital came in and changed the economics of it all. I tried other genres, but they weren’t my thing, so I ‘retired.’ ” Now working in real estate, he said he has developed an interest in drone photography and brought examples.

Salons occur on the last Wednesday of the month. The next session will be held at 7 p.m. on Feb. 28 at the art center on Garrison’s Landing. The fee is $5 for art center members, or $10 otherwise.