The Silver Spoon Cafe in Cold Spring expanded in November to the second floor of its Main Street building, adding five bed-and-breakfast rooms with private baths. They are priced on Airbnb at $136 per night as of press time. 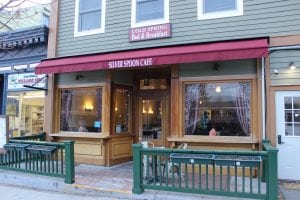 Cold Spring Bed & Breakfast is upstairs from the Silver Spoon Cafe. (Photo by A. Rooney)

Owner Abdelhady (Jimmy) Hussein says when he bought the building four years ago, he never considered opening a B&B. But once the idea hit him, he gave the tenants in the two apartments notice and, eight months later, began renovating.

“I pulled out the lights, decided upon the beds and colors, everything,” he says, with backing from his friend (and fellow Egyptian) Arafat Ali, owner of Alley’s Way Car Service in Philipstown. 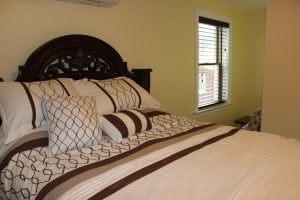 Inside one of the rooms (Photo by A. Rooney)

Each room at Cold Spring Bed & Breakfast has a carved mahogany queen bed and stained-glass windows. The bathrooms have walk-in showers, toiletries and hair dryers. There is a common area at the second-floor landing with a table of snacks, water and juice. Breakfast is served at the Silver Spoon, and dinners for guests are 50 percent off. Hussein says he’s had many guests who are visiting West Point; he has received rave reviews on Airbnb.

Soon after the B&B opened, its website was hacked (along with the website for the Silver Spoon), and the content replaced by the image of a skull and bones. Hussein says he doesn’t want to know who was responsible but that he believes it was designed to compel him to close shop, which he says he will not do. 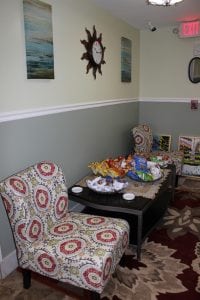 The snack table on the landing (Photo by A. Rooney)

Hussein, who lives in Wappingers with his wife, Mona, and their three children first came to Cold Spring to work at the Depot Restaurant after having worked in the hospitality business for 15 years.

2 thoughts on “A Room Above the Spoon”