As a child growing up in Israel in the 1980s, Michael Feigenbaum was obsessed with hip-hop but never imagined his youthful passion would lead to a career as a “body percussionist.”

“I wanted to play the drums, but my parents said it was too noisy,” recalls the musician, who teaches his craft at the Beacon Music Factory. “So I had to start improvising.” 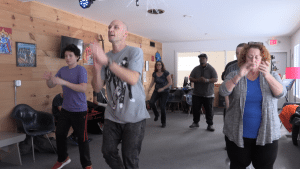 In 1988, the hip-hop practice of “beatboxing,” or mimicking drum sounds with the human voice, was relatively unknown outside of urban America. But groups such as Run-DMC, LL Cool J and The Fat Boys performed in Israel and made Feigenbaum realize he was “hooked on rhythm.”

Feigenbaum’s next body beat class at the Beacon Music Factory is April 28. The cost is $50. Visit app.getoccasion.com to register.

Beatboxing remained a hobby as he pursued a degree in mechanical engineering. But at age 24, Feigenbaum was asked to join a Stomp-like theatrical company in Tel Aviv called Mayumana.

“That’s where I learned to mix dance with percussion and beatboxing,” he says. “I knew I didn’t have the professional skills I needed, so I took lessons. I bought a drum and started reading rhythmic notation. I took contemporary dance classes and learned about theater.

How to See Michael Perform

Feigenbaum collaborates with violinist Daisy Jopling as String Pulse Duo, fusing classical with hip-hop. They will perform Feb. 28 at the Winery at St. George in Mohegan Lake. Tickets start at $20. See thewineryatstgeorge.com.

“I wanted to be able to come to a production and understand all the language regarding staging, lighting, and how to work with a director and choreographer,” says Feigenbaum, who also studied the moves of Fred Astaire, Gene Kelly and Michael Jackson.

Feigenbaum traveled to New York City in 2007 and 2010 to perform off-Broadway with Mayumana. He was soon collaborating with other artists, such as a cappella group Voca People and Franco Dragone, former Cirque du Soleil director. Feigenbaum also worked as a body percussion choreographer in Rome and Paris. 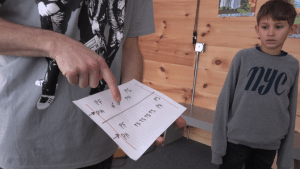 Michael Feigenbaum outlines the sequence of sounds to a class at the Beacon Music Factory. (Photo by M. Westin)

“I can teach anyone to do this,” he says. “It only requires practice, and you’ll do rhythms you wouldn’t think you could do. The shower is a good place to practice because the sounds are so clear.”

There is a downside to being a body percussionist — you can’t put your instrument away. “At this point, I cannot not hear rhythms all the time,” he says. “If I see someone walking in the street I’ll walk at their same pace and play a beatboxing groove in my head based on their steps. Then a car comes by and I add that as an effect. It’s an ongoing exploration.”

Westin is a freelance video journalist.