Petkus, who will attend Carnegie Mellon in the fall, started his night by setting a school record in the 600-meter run with a time of 1:26.33, shaving nearly two seconds off Eric Saari’s 2002 mark of 1:28 and winning the silver medal. Twenty minutes later, with a time of 37.87 in the 300-meter run, Petkus broke the school record he set a week earlier. 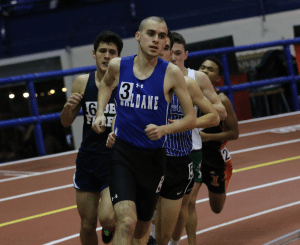 For the girls, the relay team of Maura Kane-Seitz, Ashley Haines, Emma Rippon and Heather Winne, who two weeks ago set a school record in the 4 by 800-meter relay in 10:43.96, were 20 seconds better at 10:21.45, good for the silver medal. They were pushed by perennial Class C champions Bronxville, which took gold as it has done for more than 20 years in the event.