As campaign season returns, so do calls for election reform.

In his State of the State Address in early January, New York Gov. Andrew Cuomo advocated measures to make it easier for citizens to vote and harder for politicians to engage in chicanery.

At a forum later that month hosted by Sandy Galef, a Democrat who represents Philipstown in the state Assembly, she and residents endorsed some of Cuomo’s proposed changes and suggested others.

The governor, also a Democrat, recommended that New York join 37 other states that permit early voting, in which citizens can cast ballots before Election Day. Under Cuomo’s plan, every county would leave at least one polling station open for a total of at least eight hours on weekdays and at least five hours on weekends during the 12 days before a general election. 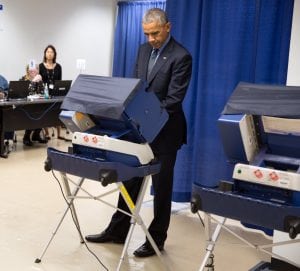 President Barack Obama voted a month early — on Oct. 7 — in the 2016 general election at his precinct in Chicago. (White House photo)

He argued that early voting would reduce lines and counter the limitations of absentee ballots, which are available only under certain circumstances, such as being away on Election Day.

Cuomo also promoted automatic voter registration, so that the name of anyone who submits an application to a state agency would be forwarded to the relevant county Board of Elections unless the person specifically declined to register. Currently only the state Department of Motor Vehicles offers simultaneous voter registration.

An attendee at the Philipstown forum, which Galef hosted at the Desmond-Fish Library in Garrison on Jan. 27, suggested the federal government automatically register every citizen on his or her 18th birthday. Galef said that was a great idea, although implementing it could be complicated.

Galef and many forum attendees lamented the number of people who are eligible to vote but don’t.

Although local turnout for the 2016 election was high (about 70 percent of eligible voters in Dutchess and Putnam counties went to the polls), it was only 57 percent statewide. In 2014, with no presidential election, it was 29 percent statewide.

Along with voter-law changes, Gov. Cuomo’s electoral agenda includes making service in the state Legislature a full-time job; limiting how much money state lawmakers can earn from outside jobs to 15 percent of their legislative salaries; and requiring that local government officials, including county executives, file financial disclosure forms if they earn more than $50,000 annually.

“Even in exciting elections, it’s not that high,” said Galef, whose district includes parts of Westchester County. “How do we get more people to vote?”

Suggestions at the forum included making absentee ballots available to anyone who asks, and longer polling hours for elections in small jurisdictions, such as fire districts. In the most recent contested fire district election in Garrison, for example, polls were open for only four hours. No absentee ballots were available.

Galef noted that fire district elections also typically take place in the evening, creating problems for voters who commute or cannot drive at night. To accommodate them, “fire departments need to have absentee ballots,” she said.

Brower replied that absentee ballots would be “just more money” spent on fire district elections, when “people complain about our budgets now.”

To encourage the use of absentee ballots, Galef drafted legislation, previously approved by the Assembly but not the Senate, to drop requirements that voters explain why they need an absentee ballot.

Forum participants also discussed combining elections. Some village elections occur in March, school board elections in May, the U.S. Congress primary in June, state primaries in September, the general election in November, and fire district elections in December.

At least two consolidation bills await action in Albany, one introduced by state Sen. Dave Carlucci, a Democrat who represents parts of Rockland and Westchester counties, would move all village elections to November and permit village and town elections only in even-numbered years to coincide with state and federal elections. (Currently, town and some village elections occur in odd-numbered years.)

Another Carlucci proposal would move school board elections from May to November. Both bills are pending in the Elections Committee. Neither would apply to fire districts.

Forum participants also talked about turning Election Day (the first Tuesday after the first Monday in November) into a federal holiday, or moving it to an existing holiday, such as Veterans Day.