Win the Gun of Your Choice

The Kent Volunteer Fire Department decided on Feb. 20 to change the prize of an ongoing fundraising raffle from a modified Windham AR-15 rifle to a gift certificate at a Carmel gun shop.

The department decided in January to raffle off the rifle and a shotgun, with tickets selling for $20 each. The department president has said it is the most successful fundraiser the 40-member department has ever done, with proceeds expected to reach $10,000.

After the Parkland high school killings in Florida on Feb. 14, the Kent Board of Supervisors asked the department to suspend the raffle. The firefighters refused but changed the prizes to $500 and $800 vouchers so the winners can select their own weapons.

Like all AR-15s sold in New York, the weapon is modified to comply with state law, meaning it can’t have a pistol grip, muzzle-flash suppressor and/or collapsible stock. The state also bans magazines that hold more than 10 rounds.

New York State Police troopers on Feb. 16 arrested a Fishkill man on charges of illegally possessing three assault rifles with large-capacity magazines. He also was accused of illegally owning a taser, brass knuckles and a baton.

Police said the weapons were discovered when troopers executed a search warrant on Max Way in Fishkill and arrested Kim Amato, 44, on a charge of felony larceny.

A video made by a Wallkill resident that shows him cutting the barrel off his AR-15 rifle with a chainsaw has received more than 25 million views on Facebook. 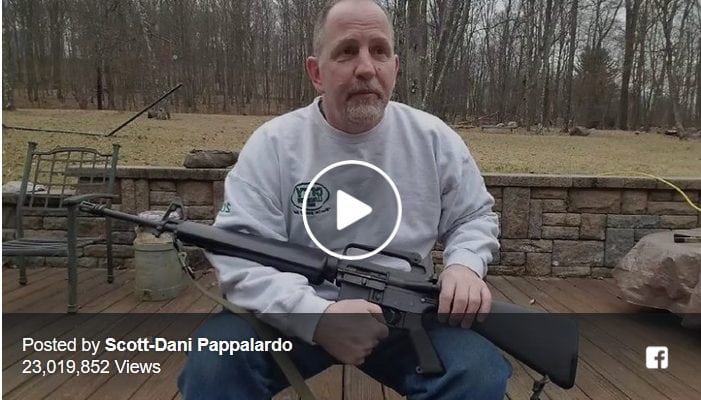 Scott Pappalardo, who has “the right to keep and bear arms” tattooed on his arm, posted the video on Feb. 17, three days after the Parkland killings.

“Is the right to own this weapon more important than someone’s life?” he asks. Pappalardo said he has owned the rifle for 30 years but didn’t want it to fall into the wrong hands.