In a marathon session that lasted more than four hours, Cold Spring’s Historic District Review Board on Feb. 21 approved applications to demolish buildings at 35 Market St. and 126 Main St. to make way for new construction.

No objections to the demolitions were raised during public hearings. 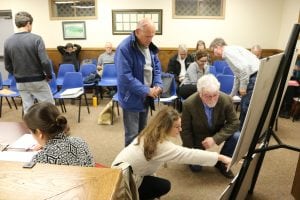 Richard Krupp was granted permission to take down a cottage at 35 Market St. and construct a building of similar size and appearance.

Beth Sigler, of the Newburgh-based architectural firm, Sigler-Henderson Studio, said the cottage was in poor condition. She told the board that the new structure would be “in keeping with the iconic form of the [existing] building,” and reuse parts of it, such as portions of the board and batten. She said that the cottage dates to the 19th century but that its original use is not known. 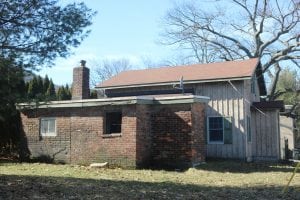 SCGY Properties, the owner of 126 Main St., said it planned to raze the mixed-use structure, which most recently housed Carolyn’s Flower Shoppe, and construct a building with ground-level retail and a second-floor apartment. The parking area to the east of the building will also be upgraded.

Speaking for the owner, Cold Spring designer Karen Parks said the existing building appears on maps dating to 1853 and began as a bakery. But in the 165 years since, the frame has deteriorated badly due to dry rot and its integrity weakened by “many cuts and compromises,” she said. “Very little of the historic fabric of the building remains.” 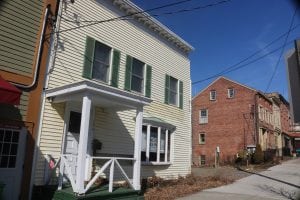 Parks said that the new building would not replicate the original but its design would fit with the village character while creating a more appealing storefront. Materials from the existing building will be used wherever possible, she said. A yarn shop will occupy the retail space.

The new building also will be built slightly to the east, creating a 5-foot gap between it and the Silver Spoon Cafe, to improve drainage. Currently the two buildings are about 6 inches apart.