Staff Sgt. Julio Fernandez of the New York National Guard arrives at work each day with one mission: Make himself obsolete.

“I’d be very happy to find another job,” he says.

Fernandez, along with Staff Sgts. Luis Giron and Windollyn Patino, are members of the New York Guard’s Counterdrug Task Force, a lesser-known operative in the war on opioid abuse.

Although the task force provides support for local law enforcement in the form of sharing its helicopters and planes (flown by Guard pilots) and handheld drug-detection gear, its members don’t collect evidence or make arrests. The three sergeants, who visited Cold Spring to discuss their jobs over coffee, focus on collecting and analyzing data and supporting community organizations. 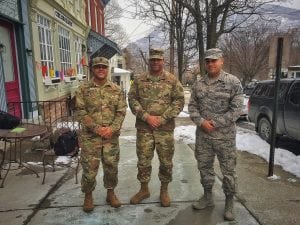 “A lot of people see us in uniform and connect us to the ‘bang-bang’ side of things,” explains Fernandez, a former security consultant in the Dominican Republic and Haiti. “We’re soldiers, and that is our primary job. But this fight, on the homefront, is just as important, and just as engrossing.”

The task force has developed a proprietary system that allows its members to monitor, in real time, the number of overdose cases coming into hospitals. The system is only operational at St. Luke’s Cornwall in Newburgh but the task force hopes to expand it to other local facilities.

When a patient who has overdosed is brought to St. Luke’s by ambulance, the task force finds out instantly. Among other things, they learn what ZIP code the victim was picked up in, how much Narcan (an opioid antidote) was administered, whether the patient survived, his or her gender and age, and when he or she was discharged. (One thing they do not learn is the patient’s identity.)

Patterns emerge in the data, and those patterns can be acted upon. For example, if the task force notes a high number of overdoses coming from a certain neighborhood on Fridays around 5 p.m., they can alert dispatchers to have ambulances positioned to cut down on response times.

The data also indicates the epicenters of the crisis. There are fewer overdoses in Newburgh than in the past, but the data show them rising in Kingston, which may indicate supply shifting as police bust dealers.

“The demand doesn’t go down,” only the supply, says Fernandez. “Someone who is addicted can’t say, ‘Well, Newburgh got shut down, I’ll take a break from heroin for two weeks,’ ” so they find dealers elsewhere.

The data also indicate that while the number of overdoses has stabilized in the Hudson Valley, the number of fatalities has risen, which the task force attributes to fentanyl, a powerful synthetic painkiller that is often added to heroin. A fatal dose is the size of a few grains of salt.

The data that the task force collects is shared almost immediately with anyone “on the front lines of the epidemic,” Fernandez says, such as law enforcement officials and health professionals, as well as members of community coalitions. “Data that’s held back is a paperweight,” he says. “You might as well have never collected it.” 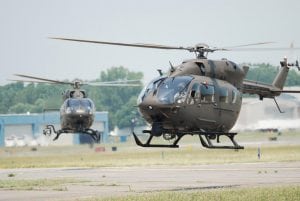 The Counterdrug Task Force provides helicopters such as these UH-72A Lakotas, and their pilots, to local enforcement agencies at no charge. (Photo by Sgt. 1st Class Steven Petibone)

In addition to its statistical work, the task force partners with organizations such as Team Newburgh and the Southern Dutchess Community Coalition to draft action plans, provide data for grant applications and attend community events. It  even put notes in pizza boxes about to go out for delivery in neighborhoods where the crisis is particularly bad listing resources for those struggling with addiction and encouragement for parents and others.

“Sometimes it’s as simple as ‘Your kids need you to be a parent and not a friend,’ so have a slice and have a talk,” says Fernandez. Task members also encourage people to volunteer. “Take more of a sense of responsibility for each person in your community,” Fernandez says. “You can’t just sit on the couch and say ‘I wish things were better’ and not make a phone call” to join a coalition.

Elaine Trumpetto, executive director of the Council on Addiction, Prevention and Education of Dutchess County, the agency that sponsors the Southern Dutchess Community Coalition, says she admires the guardsmen because they are “unafraid to roll up their sleeves. If I ask for help, and it’s something that’s within the purview of what they’re allowed to do by their regulations, they do it.”

The guardsmen have been equally impressed by the members of the community coalitions they work with. “The way they feel about their communities is inspiring,” says Patino, who grew up in a Brooklyn neighborhood ravaged by drugs.