And other business before the Putnam Legislature

Developer Paul Guillaro is asking the Putnam County Legislature to provide a name for the senior center being constructed at his development at the former Butterfield Hospital site in Cold Spring, so he can start placing signage.

“What I was looking for was the Julia L. Butterfield Senior/Community Center — if they can fit that on a sign,” said Legislator Barbara Scuccimarra (R-Philipstown) at the county’s Feb. 15 Rules Committee meeting in Carmel.

However, she said, County Executive MaryEllen Odell “is asking for input from Philipstown seniors, so I think this has to wait.” 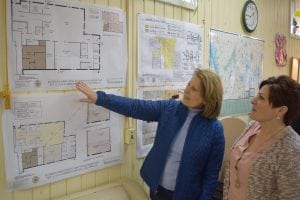 Putnam County Legislator Barbara Scuccimarra and Nutrition Site Manager Rhonda Haussmann explain the plans in April 2017 for the senior center to be built at the Butterfield site in Cold Spring. (File photo by Michael Turton)

In addition, the name will be discussed with the Philipstown Town Board and Cold Spring Village Board. “They should also have input,” she said. “I just hope the developer can keep that space open” in the meantime.

Legislator Neil Sullivan (R-Mahopac) said he thought “it was nice of the county executive to send a letter to ask them to work with her and with you on coming up with a name for the pavilion, rather than the county just picking something.”

The county plans to lease 6,000 square feet in Lahey Pavilion for the center. The space is currently being renovated.

The Legislature is again considering amending the county charter to change the job requirements for commissioner of the Department of Planning, Development and Public Transportation.

The change would allow Odell to appoint Sandra Fusco to the job. She has been the interim deputy since 2016 after moving to the agency from the law department.

Among other requirements, the charter requires the commissioner to have eight years of practical experience in regional or municipal planning.

Fusco does not meet that requirement, but the change would allow for an individual with a law degree to be considered as an alternative. The amendment also would require the individual to have at least four years of experience in government, with knowledge of federal, state and local statues, rules and regulations pertaining to land use, the State Environmental Quality Review Act and general municipal law.

“This will ensure that the qualifications or the position are not watered down or diminished, but rather, are enhanced,” argued County Attorney Jennifer Bumgarner.

Sullivan noted at the Feb. 15 rules meeting that the county is not growing like it was in the 1970s and ’80s, when the charter was created. Instead, the Legislature is focused on maintaining infrastructure, building public-private partnerships and seeking grants for repairs.

“I feel that most of the major planning has arrived and is behind us,” he said.

Scuccimarra expressed concern with the proposal, saying that to change the charter to fit a candidate was not right. She pointed out that the county will review the charter in 2019, as it does every 10 years, and that would be a more appropriate time to make changes after letting residents have input.

“We’re rushing this through,” she said.

Sullivan, however, criticized Scuccimarra for voting differently two years ago when a proposal to change the charter so Fusco could be appointed first arose. It did not receive the two-thirds vote required to pass, but Scuccimarra at the time voted yes.

At the Feb. 15 meeting, she said circumstances have changed. “This is how I feel right now,” she said.

Legislator Toni Addonizio (R-Kent) argued that because the charter does not state that the commissioner must have a degree in planning, Fusco is qualified.

The last time the charter was changed to accommodate a personnel matter was in 2012, when a residency requirement was amended to allow for the hiring of Fred Pena, who lives over the Dutchess County line, as commissioner of highways and facilities. He still holds the position. The issue will now go before the Personnel Committee.

While the League of Women Voters of Putnam County is encouraging the county to support the proposed single-payer New York Health Act that would cover all state residents, Putnam legislators say they need more information.

“It is different from the Affordable Care Act in that the ACA kept in place health insurance plans, and this would do away with health insurance companies,” Michael Piazza, the county’s commissioner of social services, told legislators at the Feb. 13 Health Committee meeting. “Theoretically, single-payer makes a lot of sense, but in the details it’s confusing for me at this point.”

Lillian Jones of the LWV of Putnam County encouraged the Legislature to pass a resolution in support of the NYHA, saying it would save Putnam more than $9 million annually in Medicaid costs.

“Should absolutely nothing be done at the state level, your costs are going to go up much higher than they are now,” said Jones. “It seems to me that it’s a win-win.”

The NYHA has passed the Assembly four times but has never passed the state Senate.

“It sounds like it’s socialized medicine, in a sense,” said Ginny Nacerino (R-Patterson). “Like one for all and all for one.”

8 thoughts on “What Should Senior Center in Cold Spring Be Called?”