Marcelline Thomson is an unreliable narrator.

That’s not an accusation; she admits it. She has written what, at first glance, appears to be a memoir, which it is — and isn’t.

The Philipstown resident’s first novel, Dreaming of Oranges, published in January in paperback and digital editions, depicts a close friendship and the wanderlust-driven adventures which stem from it. The time Thomson spent living in locales around the world, including Beirut, serves as a springboard for fictional intrigues.

A friend who read an early draft said the protagonist sounded like “an unreliable narrator: fact mixing with fiction, coming from fiction,” says Thomson, a former public relations and advertising executive. “At first I was concerned, but then I thought, Why not? We did go to the places in the book, but then imagination takes over. As my friend put it, ‘The thing with reality and fiction and unreliable is that they can all exist together in a creation.’ ” 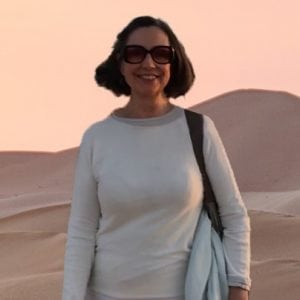 Marcelline Thomson, in her favorite landscape: the desert (Photo provided)

Opening with a heart-thumping traffic stop en route to an airport, the novel dips back to a time when, inspired by Lawrence Durrell’s Alexandria Quartet, two friends-to-be from different backgrounds meet in college. It then sets sail with them, first to Greece, then Egypt and Cyprus, in an era when it was possible to not be closely followed by parental eyes and apps.

“My friend and I did read the Alexandria Quartet, but, unlike in the book, our parents knew where we were headed and sanctioned it — that’s one part I did fictionalize, because, strangely, something can be true, but not credible,” Thomson says. 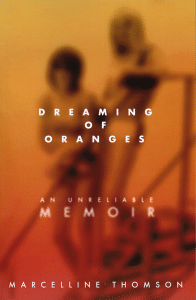 “We didn’t have a lot of plans,” she recalls. “It was a wonderful time, and there was nothing other than the ordinary kind of danger traveling to the Middle East then — although no young American women went there — even going to Greece was unusual. We were following in the footsteps of authors we admired, like Freya Stark, though what we did was nothing compared to what she got up to.”

Thomson invented many of the male characters. “Young boys would often attach themselves to you; they had such yearning,” she recalls. “This boy in Addis Ababa came, every single morning, to the hotel.”

Thomson says she always wanted to do a book about her early life and attempted it in fits and starts. “Last summer I got tough on myself and said, ‘Do it, or drop it.’ ” Her husband, David Duffy, who writes crime fiction (and is a member of the board of directors of Highlands Current Inc.), offered some advice. “Why don’t you start it at a dramatic point?” he told her. She thought that might work for crime fiction, but not for a memoir-novel. But it got her started.

Thomson decided to self-publish partly out of impatience with the prospect of finding an agent and selling it. “I was going to have instant gratification, or I’d be demoralized by it,” she says.

She is mulling over a travel memoir. Although she lived in Bangkok, she never visited China. “It was basically forbidden,” she says. “We forget that now.” She is also drawn to the desert, especially the Sahara. “In that part of the world, so much happens that we don’t understand,” she says. “If you want to be in a place where you don’t know what will happen, that’s the place.”