Homeland Towers and Verizon Wireless sued the Town of Philipstown on Feb. 20, alleging it violated federal law and acted in an “arbitrary and capricious” manner to deny permits for their proposed 180-foot cellphone tower near the Route 9-Route 301 intersection. The tower was planned for a privately owned parcel off Vineyard Road. 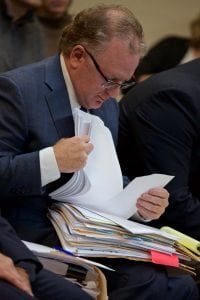 Robert Gaudioso, an attorney for Homeland Towers, is shown at a November hearing on an application to build a cell tower in Nelsonville. Homeland Towers and Verizon have sued Philipstown after it denied a similar application. (File photo by Ross Corsair)

On Jan. 22, ZBA members voted 4-1 to deny the permit, citing a series of reasons, including a lack of need for another tower in a town that already has nine and the negative impact on Philipstown’s scenic and rural character.

In its 6-0 vote the same night, the Conservation Board also denied the permit, citing fears of harm to a wetlands buffer. Its members earlier had issued a statement saying the board had “never allowed a building in a wetlands buffer or encroachments on water courses unless there is an absolute, compelling reason to do so.”

The boards spent dozens of hours from June through January scrutinizing the proposal and listening to comments about it — largely negative — from neighbors and other residents.

The 72-page complaint, filed with the U.S. District Court for the Southern District of New York, names the Philipstown Town Board; the ZBA; the Conservation Board; Greg Wunner, the building inspector and code enforcement officer for the town; and Max Garfinkle, the town’s wetlands inspector and natural resources review officer.

Filed by Robert Gaudioso, Homeland Towers’ attorney, the complaint asks the federal court to order the town to immediately issue the necessary permits; return thousands of dollars in application and escrow fees, which it described as “an illegal tax”; and pay the plaintiffs’ attorney fees and other, unspecified, “damages and interest.”

In part, the complaint alleges that:

The complaint also faulted town officials for “catering to a small but vocal group of politically influential objectors.”

Shea said Thursday (March 1) at the Town Board’s formal monthly meeting that “we look forward to defending that [case]. Right now we’re formulating a plan” with attorneys. Philipstown must reply to the lawsuit by March 14.