Girls next play on March 6

The Haldane girls’ basketball team advanced to regional competition in the state tournament on Saturday (Feb. 24) with a convincing 50-30 win at Pace University over Keio Academy. It was the fifth consecutive season the Blue Devils (12-10) have won the gold ball as Section 1, Class C champions.

Senior Allison Chiera, who scored 21 points and had 11 rebounds, was named the tournament MVP for the third straight year. Chiera and sophomore Olivia Monteleone were named to the All-Tournament team. 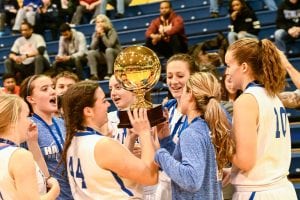 The Blue Devils next take on Section 9, Class C champ Millbrook at 3:45 p.m. on Tuesday (March 6) at Beacon High School. Millbrook, ranked third in the state among Class C girls’ teams by the New York State Sportswriters Association (NYSSWA) as of Feb. 18, beat Seward, which was ranked 11th, by 26 points to win the regional title. Haldane was not ranked.

To reach the Final Four on March 16 at Hudson Valley Community College in Troy, Haldane needs to upset Millbrook on March 6 and defeat the Section 11 champ on March 9.

In the second game of the day at Pace, the Haldane boys’ team fell to Hamilton, 66-47, in the Section 1, Class C title game. The Blue Devils advanced to the final after a dramatic 54-46 overtime win against Tuckahoe on Feb. 20.

Against Hamilton, senior Nick DiPalo scored 14 points and sophomore Matt Champlin had 11 for the Blue Devils, who finished 16-7. Both players were named to the All-Tournament team.

Hamilton won its first sectional title since 2007. The Red Raiders lost to Haldane in the title game in 2015 and 2016.

Haldane received an honorable mention in the NYSSWA Class C rankings for the week ending Feb. 25, and Hamilton was ranked tenth.