Barrel-making returns to the Hudson Valley

John Cox had been making cabinets for almost 30 years when a friend alerted him in 2014 about the crisis, and an opportunity.

New York had a barrel shortage. A law passed in 2007 had allowed more than 100 distilleries to flourish in the state, but thanks to hard-core lobbying in 1933 by the Cooper’s Union, federal regulations require that whiskeys be stored in charred-oak barrels that, with some exceptions, cannot be reused.

In addition, there were only about 40 barrel makers, or coopers, in the U.S., and they were predominantly in Kentucky (for whiskey) and the Napa Valley (for wine). 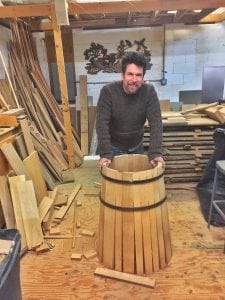 John Cox at Quercus Cooperage (Photo by B. Cronin)

After researching the industry, in 2016 Cox opened Quercus Cooperage (quercus is Latin for “oak”) in High Falls, making him the only cooper operating in the Hudson Valley and one of four in the state. He’ll talk about the art of barrel-making and the relationship between coopers and shipbuilders at the Beacon Sloop Club at 7 p.m. on Thursday, March 8.

During his two years of research before he opened his shop, Cox looked for information on how to build traditional barrels, which are constructed without glue or nails. He relied on a few YouTube videos made in Hungary, studying them frame-by-frame, even making notes as to what tools were hanging on the walls.

Cox joins a rich history of Hudson Valley cooperages. In the 19th century, the industry turned out barrels to ship concrete, pine tar and other goods. The wood came from the Catskill and Shawangunk Mountains, where farmers would cut down saplings and spend the winter by the wood stove fashioning the green wood into hoops to bind the barrels. Cox found a historical record that noted that in 1881 alone, 55 million wooden hoops were made in the Catskills. 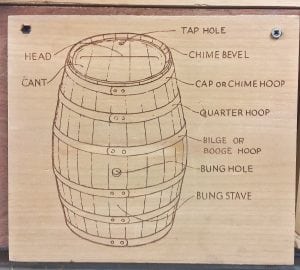 Barrel terminology (Photo by B. Cronin)

Tools in hand, Cox says he reverse-engineered a barrel to figure out what each one did. “I’d look at this,” he says, holding what looks like a corkscrew encased in armor, “and ask myself ‘Why is this like this? Why is it tapered? What did this do?’ ”

The device in question turned out to be a bunghole reamer, made to drill the holes — known as bungholes — in the side of the barrel to get at its contents. The drill is designed to pull the wooden shavings out as it enters the barrel, depositing them in the casing instead of in the whiskey inside.

Cox is not a Luddite, and uses modern technology when he can. Even so, it takes about 11 hours for him to make each barrel, a pace that has its drawbacks. “I mean, look at this,” he says, pointing to a mechanical spindle-shaper that he has jury-rigged with metal hoops and C-clamps. “I can’t put some 19-year-old kid on this for $10 an hour. It’s too dangerous and there’s too much skill involved.” 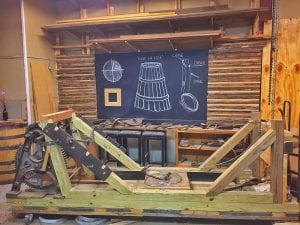 “The sled,” a device Cox designed and built to shape barrels (Photo by B. Cronin)

Or consider the contraption Cox refers to as “the sled.” It looks like a medieval torture device for blasphemous peasants but is used to pull nascent barrels into a form Cox refers to as mise en rose, French for “the heart of the rose.” Cox acquired the winch that powers the device from the estate of the John Henson, son of puppeteer Jim Henson. “In every barrel I make, there’s a Muppets connection,” he quips. “That’s important to me.”

Cox is in the process of removing some of his shop’s walls to bring in larger machinery. He wants to streamline the process so that “every single step doesn’t have to be done by me.”

Some parts of the production can’t be rushed. The Catskills are the northern tip of the range for white oak, and Cox uses only New York white oak in his barrels. Barrels have to be made with oak because of the high quantity of medullary rays, which are the winding, ribbon-like formations that grow perpendicular to the tree’s growth rings.

The rays contain gate valves (tyloses) that close as the wood dries, making it watertight, Cox explains. This means the oak has to be aged at least 24 months before it can be used, yet it still must be green enough to bend, something that Cox says anyone who has worked on a wooden ship will appreciate.