A Putnam Valley Middle School student was killed by a tree downed by high winds that split his home in two just after noon on Friday, March 2.

According to the Putnam County’s Sheriff Department, when Deputy Charlie Johnson responded to an emergency call from 33 Dunderberg Road at 12:15 p.m., he found a large tree had crashed into the home and trapped Carmelo Singleton, 11. Johnson attempted to rescue the boy but could not reach him. 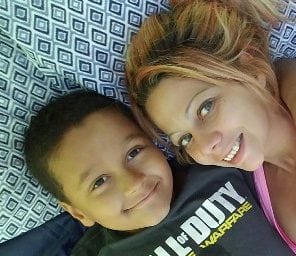 Carmelo with his mother (GoFundMe)

Members of the Putnam Valley Fire Department also attempted to rescue Carmelo, who had been home with his mother, Arin Travis. He was pronounced dead at 12:50 p.m. by EMStar medics.

Putnam Valley schools were closed on Friday due to the snowstorm and high winds.

The Putnam Valley Central School District said, although school will be closed on Monday, March 5, due to road conditions and power outages, staff, parents and students are invited to the high school between 10 a.m. and 1 p.m. for support, connection and counseling. Children should be accompanied by an adult. There will be snacks, coloring activities, therapy dogs and counselors available. Anyone unable to attend can call 845-526-7847, ext. 1300, during the same hours. 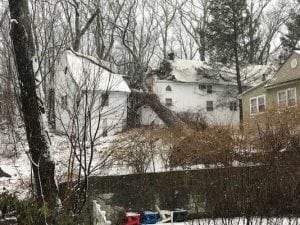 The tree split the home on Dunderberg Road in half.

Carmelo was born Jan. 15, 2007. He loved playing his PlayStation. Besides his mother, he is survived by his older brother, Chase Travis; his grandmother, Vicky Kennedy; his great-grandfather, Charles Robert Keesler Sr.; his aunts Diane Travis, Jillian Santana and Nichole Travis; and his cousins Hera Travis, James Dantzler and Nylah Travis.

Visitation will be held on Tuesday, March 6, from 4 to 8 p.m. at Edward F. Carter Funeral Home, 170 Kings Ferry Road, in Montrose. A graveside service will be held at 11 a.m. on March 7 at Hillside Cemetery on Oregon Road in Cortlandt Manor.

Diane Travis organized an online fundraiser to assist the family with funeral expenses that raised more than $13,500 in four hours.

At least seven other people in the Northeast and Mid-Atlantic states were killed by falling trees or limbs on March 2, authorities said. They included a six-year-old boy struck in his bed at 2 a.m. in Chesterfield County, Virginia, by a tree that fell on his family’s mobile home.