When Jennifer Clair first stepped into what is now her Beacon home, her eyes widened in the kitchen. After years of Brooklyn living, she took a shine to the corner house with ample room to cook.

Kitchens are important to Clair because she’s been obsessed with cooking since her childhood in suburban Connecticut. Today she runs Home Cooking New York, a school in New York City, and on March 6 will publish her first cookbook, Six Basic Cooking Techniques: Culinary Essentials for the Home Cook, designed by Dan Weise and with photographs by Meredith Heuer, who also both live in Beacon. 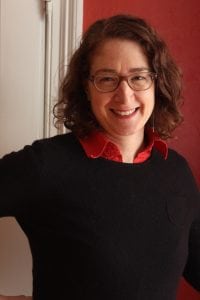 Jennifer Clair (Photo by A. Rooney)

“Even as a young child, I loved food,” says Clair. “My friends and I would create pretend restaurants, and write up menus. I was my best self around food.”

She took her first cooking classes in Florence during a year abroad while studying history at the University of Pennsylvania. “Seeing all the small shops, which specialized in just one thing, was a revelation,” she says.

After graduating, she taught third grade but decided it wasn’t for her. She found a job as an assistant to a cookbook author and won a scholarship to the Peter Kump New York Cooking School. There she found herself, for the first time, in a room full of people who felt the same way she did about food. “We’d talk about food all day long, then go out and eat more, heading to outer boroughs to find it,” she says.

Following an internship at Saveur magazine, and shepherding cookbooks to publication at William Morris, she landed a job as the food editor for Martha Stewart’s website. It was there she learned the art of recipe presentation. 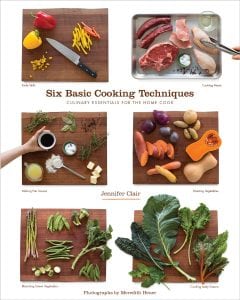 Six Basic Cooking Techniques will be released on March 6.

“Instead of saying, ‘Sauté for approximately two minutes until done,’ you need to say, ‘Sauté until the chopped onions turn brown at the edges,’ ” she explains. “You owe it to the reader to be as clear and precise as possible. Amazing chefs are not necessarily great recipe writers.”

The book outlines the six basic techniques that Clair teaches her home cooking students to give them “a solid culinary foundation,” such as how to handle a chef’s knife, how to cook meat, how to create pan sauces, and three methods to prepare vegetable dishes. It also discusses what Clair considers essential ingredients like Kosher salt, extra-virgin olive oil and Parmigiano-Reggiano cheese.

Six Basic Cooking Techniques will be available at homecookingny.com and Utensil in Beacon.