Beacon painter has always found the next place

In her studio near the Beacon riverfront, Paola Ochoa lets things come to her. And she has confidence that they will.

“All of my work comes out of the idea that I can trust myself to get to work, and the work will come out,” says the artist. “Maybe it’s intuition, or a kind of energy at hand, whatever it is, it leads to a decision to create a composition.” 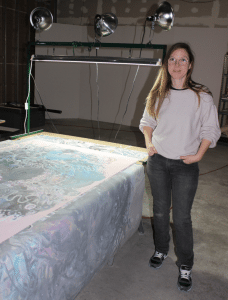 Paola Ochoa (Photo by A. Rooney)

Ochoa, whose exhibit, What The Thunder Says — its title taken from a passage in T.S. Eliot’s The Waste Land that Eliot borrowed from the Upanishads — opens at Matteawan Gallery on Second Saturday, March 10.

Ochoa will soon be turning her studio into a gallery, at the request of her landlord, who wanted the space to have a public face. Called Mother Gallery, and run by Ochoa and Kirstin Deirup, also an artist, it will open on April 14. When it does, Ochoa will retire to the attic to paint in a smaller space but with the same big theme: “Investigation into what is within us.” 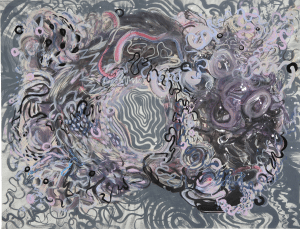 During the year she has been in that studio, Ochoa has created nine oversized paintings. Because of the space limitations of Matteawan, the exhibit is an overview of her work with one of the new paintings, Ariadne’s Thread.

Born in Medellin, Colombia, Ochoa, 39, lived there until she was 11 or 12, when her family immigrated to Miami to join a grandparent who was a U.S. citizen. They came largely to escape the violence of the drug wars under Pablo Escobar. Ochoa says she does not remember much about that time in her life and her older family members would rather not talk about it.

“My works have been a place for me to find my own identity, and work through the trauma of the past,” says Ochoa. “My studio practice is my spiritual practice.” 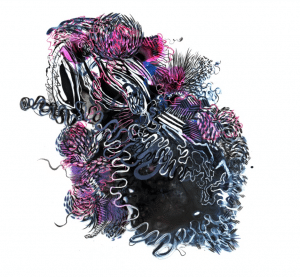 After graduating from high school in Miami, she dreamed of attending Pratt Institute in Brooklyn to study computer animation and was thrilled to be accepted.

But she had no money to live in New York, and so instead followed the counsel of “an internal voice” and relocated to Denver. “I knew nobody, yet took my three bags and went,” she says. She received a scholarship at the Rocky Mountain College of Art and Design to study graphic design and animation.

Her animations were character-driven rather than narrative, she says, and inspired by nature. “I was trying to convey emotional space through image and sound,” she explains. “My professors wanted me to do more narrative, but I decided to enroll in senior portfolio class through the painting division. I came to realize I was making paintings — moving paintings.”

In that class, she was spotted by Cydney Payton, then director of Denver’s Museum of Contemporary Art, who asked her to be part of a residency program for artists under age 30. “That made me think, OK, I am an artist,” Ochoa says. 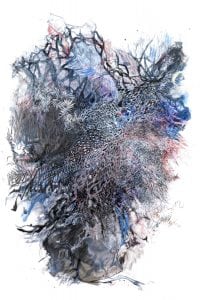 After creating two video installations at the Denver museum, she moved to New York. “There was so much less space, less time and less money, and I had to adapt,” she says. “It was much easier to use ink and paper, so I started making ink drawings. It was freeing to let go of the technology.”

Along the way, Ochoa met the man who became her husband, Nick Page, who in 2017 was elected to the Dutchess County Legislature. They lived in Brooklyn but Page worked in Beacon and suggested they move. She resisted but now notes that “when I think I lived in Brooklyn for 10 years and the people in the corner bodega never knew my name, I realize it’s been good for me to open up here. I’m a Beaconite!”

What The Thunder Said runs through April 15. An opening reception will be held at the gallery, at 436 Main St., on Saturday, March 10, from 6 to 9 p.m. Matteawan will also host a discussion with Ochoa about her work on Sunday, April 8.