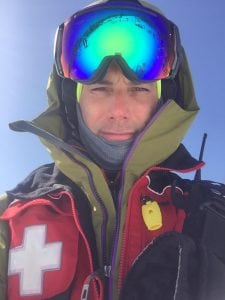 Greg McCoy of Cold Spring is a member of the National Ski Patrol.

What do you do as a member of the ski patrol?

I volunteer 16 days a year as a first responder on the snow for everything from lost children to first aid. We keep an eye on the weather; conditions can be normal and an hour later you have solid ice. We keep trails safe, mark exposed rocks. The hardest part is that you have to know the mountain like the back of your hand.

How did you get started?

I learned to ski when I was 6 years old, and I was a ski instructor for five years. I’m a chiropractor, and after I finished chiropractic school my wife and I bought a place in Vermont and I wanted to get involved with the mountain. Ski patrol is hard but rewarding. You have to love it, and you have to be an excellent skier.

How do you handle injuries?

We’re trained in Outdoor Emergency Care, which is EMT training specific to ski patrol. It’s not an easy environment; it’s cold up there. We have emergency gear, oxygen and lifesaving equipment, but the toboggan is our main tool. When someone is hurt, our objective is to prevent shock, load them up and transport them safely down the mountain to an ambulance or, in a severe case, a helicopter.

How do rookie and veteran skiers differ?

Rookies don’t evaluate the terrain. They ski too fast, not thinking about what’s 20 yards ahead. Veteran skiers choose their days, know the terrain. But after lunch, they’re tired and maybe had a beer or two; their reflexes are diminished. That’s when even veterans get in trouble.

We’d have snow, then it would warm up, then back to cold, so you’d get ice under snow and that’s when it gets dicey. But March is the premier skiing month in the Northeast. Families can get out there, it’s not so cold, the snow softens up and it’s not dark by 4:30 p.m. Many people ski from mid-February until the end of March. In big snow years, such as 2015, we’ve gone until the middle of April.