Marbled Meat Shop and Stock Up, the twin establishments run by Lisa Hall and Chris Pascarella in Philipstown and Beacon, respectively, are expanding beyond the meat-and-deli cases to host community dinners and lead workshops about their “utilize the whole animal” approach to butchering. 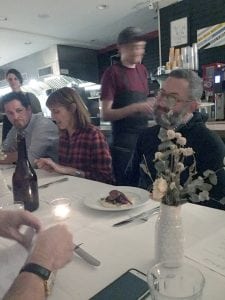 Lisa Hall (standing at far left) keeps an eye on the service during The Butcher’s Harvest on March 9. (Photo by A. Rooney)

The dinners, called The Butcher’s Harvest, take place on Friday nights at Stock Up (29 Teller Ave., Beacon); they are scheduled for March 30 (fish, with Hudson Valley Seafood), April 20 (TBD) and May 24 (whole hog barbecue). Each begins at 7 p.m. with an hour of socializing over draft beer, cider and wine.

Each communal dinner includes 24 to 30 guests and costs $75 per diner, excluding beverages and gratuity. They provide an opportunity to meet neighbors and tablemates of various generations.

“We’ve always done things like this, privately,” Pascarella explains. “I have a big Italian family and Lisa has a Greek one. We used to have a community of friends over in our Brooklyn backyard; we were always smoking meats there.”

The dinners were inspired, Pascarella says, by the Court Street Grocery, a shop near their former home in Carroll Gardens, Brooklyn. “They did these super-casual, three-course, relatively affordable little dinners,” he says. “It was always on the back burner for us: creating something with almost a pop-up vibe.”

He said the dinners also came about because “we have a full staff of culinary-trained people making sandwiches at Stock-Up who are eager to do more and a freezer full of off-parts that we can make exciting.” 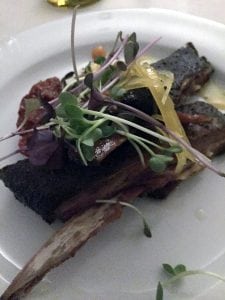 Pascarella says the passion to use the entire animal was instilled by his grandparents. “They didn’t have tons of money, and never let anything go to waste,” he recalls. “The less expensive cuts are just as good, if not better sometimes. Some delicious cuts are a third of the price, and still suit the use.”

Each dinner is built around a theme. For Valentine’s Day, the dishes made use of beef cheeks and chicken hearts. The March 9 meal was barbecue, with Lone Star Hots (Texas hot links), prairie breeze grits and braised greens. The fourth course — pork belly glazed with fermented hot honey, pickled watermelon rind and lard-fried hush puppies — was dubbed Piggy Smalls (after the late rap musician, of course). Stock Up was gussied up for the occasion with a white table-clothed, candle-lit, long central table, plus a couple of smaller tables.

Sharon Charles, who moved with her husband to Cold Spring a year ago, said she came to the dinner to make friends — and avoid cooking, which she hates.

“This is just delicious,” she said midway through the five courses.

Mary Ann Syrek of Philipstown was impressed, as well. “This shows a lot of inventiveness,” she says. “They’re not just selling meat, they’re creating a new kind of communal table. It’s not same old, same old.” 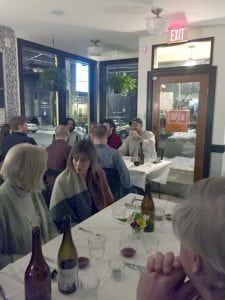 Diners eat at communal tables. (Photo by A. Rooney)

Hall and Pascarella also host three-hour classes at their kitchen at Marbled Meat, on Route 9 in Philipstown. “It’s less about how to cook and more about a fuller utilization of animals through asking for different cuts” such as shifting from pork chops to pork sirloin, Pascarella says. “We go over why each section has its benefits.”

He turns to sausage. “For years, people have thought sausage was made from all the icky bits, but instead we’re using parts from our whole, pasture-raised animals. Even with chicken, why just always get a pack with two breasts? Buy a whole chicken, make a soup using the bones and stay healthy all winter.”

The courses also include knife skills, he said, such as “how to spatchcock a bird.”

The next class is tonight (March 16) and covers sausage, followed by chicken on April 6 and pork on April 27. They each cost $75 to $100. Register at marbledmeatshop.com.