Ed Collins is the owner of Ed’s Service Center, which was located for 27 years at 226 Main St. in Beacon before relocating to 52 S. Chestnut St. in January when the building was demolished to make way for an apartment building. 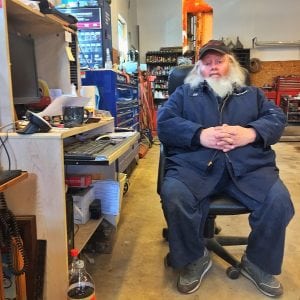 Ed Collins (Photo by B. Cronin)

How has Beacon changed in the time you spent on Main Street?

I don’t see Beacon as Beacon anymore. The way the town is being built, architecturally, they’ve sucked the life out of it. They should have put up buildings like the Howland Center that help the city remember what it was. They’re improving the town but not the infrastructure. We’re running the same water and sewers. How many apartments do you think they’ve put up, each with two toilets?

Are you upset that your garage is gone?
That don’t bother me. The city’s gonna do what the city wants to do. I can’t say nothing against the two guys who bought it. They helped me move. I understand their point because they had to have the foundation in the ground by the end of the month or they could only go up to three stories [because of a possible change to the city’s zoning]. They wouldn’t have bought it unless they could go up to four.

What do you like most about the new space?
My old place was medieval. When I first walked in there, it felt like it had wooden floors because of the grease. It took me and a friend two days with ice choppers to get it off. I was there so long that it was like another home, but this place is much better. The floors are level. This gentleman [points to building owner Andy Antalek] went out of his way to help me. He actually used to rent my old space, back in 1974. Andy’s done a hell of a job here.

What car do you drive?
’02 Camaro. The last edition they made. It’s a convertible. I’ve had convertibles all my life.

Is there a make of car you see least often for repairs?
No. Everybody’s got a car and everybody’s got a problem. I’ve got a guy here who doesn’t mind working on Mercedes and BMWs, and he’s even fixed a few Porsches, but I don’t like to get into the high-end cars because the owners are usually a bunch of schmucks. They don’t take good care of their cars. You should only drive what you can afford, because that way you can afford to fix it. People think they can let things go for months and get it fixed for 10 bucks.

One thought on “5 Questions: Ed Collins”