Initiative will build on work of MLK Jr.

At the time of his assassination in April 1968, the Rev. Martin Luther King Jr. was organizing a political movement he called the Poor People’s Campaign. Fifty years later, volunteers are working to revive it.

The Rev. Emily McNeill, co-chair of the state campaign, part of “a national call for moral revival,” will speak on Thursday, March 22, at 7:30 p.m. at the Beacon Hebrew Alliance. She is also executive director of the Labor-Religion Coalition of New York State and a United Church of Christ minister.

Her talk will coincide with the finale of Better Together, an annual interfaith class led by Rabbi Brent Chaim Spodek of BHA and other religious leaders. This year, the class has been studying the Book of Exodus, which includes the story of the Israelites’ delivery from slavery. 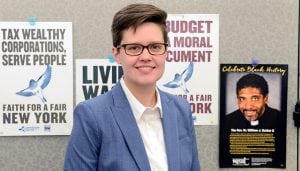 McNeill’s talk will dovetail with the Exodus story while also spreading the word about the Poor People’s Campaign, which is relaunching on Mother’s Day (May 13) with “40 days of moral actions.”

Events are planned in some 30 states to increase awareness of poverty and related issues. The campaign will end with a march in Washington, D.C.

Spodek said he hopes the effort can refocus dialogue on issues of importance to marginalized populations such as environmental justice, hunger and racism.

“This is about how we live our public lives together,” he said. “It often feels like religion should deal with issues of private morality, and our public concerns are outside of that. That’s a real loss for society and a real loss for religion.”

The Poor People’s Campaign is deeply personal for him, he added.

“In many ways, the essence of the Exodus was about coming out of a society that was built on the oppression of others,” he said. “Now, to be living in a society as wealthy as ours, where the [economic] gaps are so tremendous, it feels like to not be concerned about the most vulnerable members of our communities would make every word of prayer that comes out of my mouth blasphemy.”

Although Beacon appears to be thriving, there is a significant and growing disparity that must be addressed, agreed the Rev. Ed Benson, pastor at the New Vision Church of Deliverance. He said many residents live month-to-month. “They can’t keep food on their tables,” he said. “There’s construction of so many luxury apartments, but for individuals who are middle-income or lower class, they can barely afford any housing.”

Benson advised residents to keep in mind King’s refrain, “If I can help somebody, then my living shall not be in vain.”