For Henry James, the two most beautiful words in the English language were “summer afternoon.” To which I reply: good on you, 19th-century man. You are far more refined than I am.

Because for me, no pair of words has ever surpassed the loveliness of “bake sale.”

Oh, the joy I felt as a kid coming upon a hand-painted sign bearing those proud monosyllables, and then beholding the treat-laden table nearby.

Yet joy such as that is hard to sustain, even for a 9-year-old, and my feelings would grow increasingly complicated as I scanned the table: Paper plates all but flattened by the weight of snickerdoodles giving way to wax paper bags bulging with fudgy brownies, pans of seven-layer bars, stacks of blondies, glorious fruit pies and pastel-iced cupcakes doused in rainbow sprinkles. 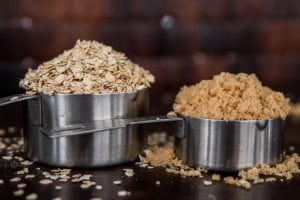 Whatever cravings these sights elicited were tempered by the agony of knowing I’d have to choose just one; the fear of choosing wrongly; the certainty that, after two bites of whichever treat I did select, I would yearn for the ones I had not chosen; and the sheepishness I’d feel begging my mother for another dime or quarter.

A dime, a quarter: That’s how old I am. Old enough, too, to remember the days when everything at a bake sale was homemade — and moreover, when “homemade” meant not merely unpackaged and stirred at home, but actually made from scratch using ingredients found in an ordinary home’s cupboards and refrigerator.

In addition to being an ardent bake sale customer, I was also a doyenne of the realm behind the table. In those days, my family belonged to a Quaker Meeting in Richmond, Indiana. Our Sunday school education consisted of religious-ish life lessons couched in folk songs and good deeds, such as sponsoring orphans in developing nations and saving endangered owls. Our causes required cash, in other words, and for school-age kids (at least those of us of a non-delinquent bent), the options for raising it were few.

One month, when it was time to host yet another bake sale, a new family contributed oat bars to our inventory. Buttery, brown-sugary, redolent with the gentle nuttiness of fresh oats, they won my heart with one bite. And just like that, my bake sale anguish was over. Never again would I wonder which treat to spend my change on. 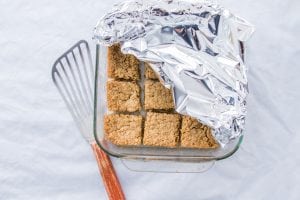 Moreover, oat bars were ridiculously easy to make. With five ingredients and two steps, they were the kind of thing a 9-year-old could bake by herself in under a half-hour. And polish off, with a little help from her sisters, in a few hours more with hardly a thought for the owls.

It took me a long time to realize that bake sales to a parent are not what they are to a child. At first, when our kids were very small, my heart would leap whenever an email arrived announcing an upcoming bake sale. More than once, I spent hours baking up batches of Valrhona-chocolate brownies or real-butter cookies, gratified at the thought that I was helping support some class activity or after-school program. I was slightly crestfallen to place my plain, rough-edged treats among the perfect store-bought goodies; sadder still to take most of mine home, uneaten, at the end of the sale. Eventually, the reality of modern kids’ tastes sunk in, and I turned curmudgeonly.

But old hopes and habits die hard. Just the other day, I felt that old jolt of excitement when asked to contribute to a bake sale. The truth is, I won’t ever be able to talk myself out of baking from scratch. But this time, I’ll do it in under 30 minutes. And I’m already looking forward to the leftovers I’ll bring home when it’s over.

These are essentially an oat shortbread. You can add ½ cup of chocolate chips to the recipe — and the resulting bars are also great. But to me, chocolate overwhelms the quiet magic of the original flavors.

Preheat oven to 325 degrees. In a mixing bowl, cream together the first three ingredients until light. Add remaining ingredients, and mix until combined.

Transfer batter to an ungreased 8 x 8-inch pan, and press gently. Bake 15 minutes, or until golden and slightly puffy all over. Set pan on a rack, and allow to cool before cutting.