Village Board expands from three to five seats

On Tuesday (March 20), Nelsonville voters elected Michael Bowman and Dave Moroney to two-year terms as trustees on a newly enlarged Nelsonville Village Board. Bowman, who received 98 votes, and Moroney, with 74, defeated Rudolf van Dommele, who collected 68.

The election gives Nelsonville a five-member Village Board for the first time since 1898, when the board’s size was reduced for reasons lost to history.

Incumbent Trustee Thomas Robertson ran unopposed for a one-year term and got 96 votes. 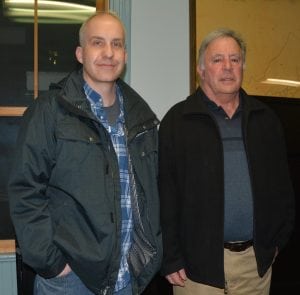 Michael Bowman and Dave Moroney were elected to the Nelsonville Village Board. (Photo by L.S. Armstrong)

Nelsonville has 382 registered voters; 132 participated, for a 35 percent turnout.

Bowman served a term as a Cold Spring village trustee before moving to Nelsonville, where he grew up. Moroney is a local contractor.

“I look forward to working with these guys,” Bowman said of his new colleagues. He said the village faces various challenges — before the election he mentioned the questions posed by cell towers as an example — and predicted that “more hands on deck” with a larger Village Board will make it easier to address them.

Moroney noted that this election was “a lot different than last time,” when he ran in 2015 as a write-in candidate for mayor. “It’s going to be an experience, to get to see how politics really works,” he said.

The three newly elected trustees are expected to be sworn in before the April 16 Village Board meeting.