The Beacon City Council will hold a public hearing on Monday, April 2, to hear feedback on a plan to regulate short-term rentals, including those made through Airbnb and similar websites.

While the hearing isn’t focused solely on 51 Orchard Place, the property, owned by Beacon resident David Allis, has been front and center in the discussion.

Allis purchased the 2,400-square-foot, five-bedroom home after it was foreclosed in October. In December, some neighbors complained to the City Council after he cut down more than a dozen trees on the property. The city fined Allis $250 for taking down too many trees without a permit, but other neighbors thanked him for clearing the property and at the council’s March 5 meeting asked the city to refund the fine.

The home was refurbished in preparation for listing it on Airbnb.com; the effort prompted the city earlier this year to consider regulating short-term rentals. (The council also revised the city’s tree-cutting regulations, changing the fine to $350 per tree rather than $250 per incident.) 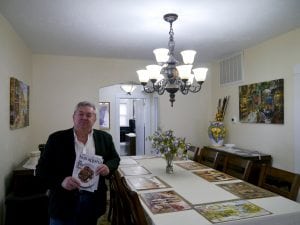 David Allis, the owner of 51 Orchard Place, inside the home (Photo by J. Simms)

Beacon’s existing zoning code allows homeowners to rent out single-family homes, but the law is less clear when it comes to renting only part of a house. After hearing from the public, council members could also choose to allow rentals in non-residential parts of the city, like Main Street or the Linkage District. And any regulation the council adopts would likely require owners to obtain a permit for short-term rentals, along with regular inspections by the city.

“The concept is to allow it, but it has to be owner-occupied and there is a series of application requirements that it will need to follow,” City Attorney Nick Ward-Willis explained during a council meeting last month.

Where the issue gets even more complicated is at the state level. New York law refers to owner-occupied rentals in single-family dwellings as either traditional bed and breakfasts or “lodging houses,” with the latter requiring fire sprinklers and other heightened safety measures. The state code considers newly built dwellings as lodging houses, while homes converted into rentals are bed and breakfasts.

Most of the short-term rentals operated in Beacon, even if legal within the city’s zoning laws, probably violate the state’s code for fire safety, no matter which category they fall under, Building Inspector Tim Dexter said.

Airbnb, one of the largest platforms for short-term rentals, is happy to work with municipalities on “common-sense regulation” that “works for both local government as well as our community,” said Josh Meltzer, head of Northeast Policy for the company. “We look forward to finding a path [in Beacon] that not only addresses the need for transparency and public safety but empowers hosts to continue using their homes to earn extra income.”

According to the company, there were 110 Airbnb hosts in Beacon in 2017, with 94 percent of them listing a single property. No hosts had more than two listings.

Allis cut down more than a dozen trees outside the Orchard Place house. (File photo by J. Simms)

Guests stayed an average of two nights, with an average group size of just over two people — evidence, Airbnb says, that travelers staying in Beacon are primarily couples and families coming for weekend trips. The typical host in the city earned about $8,800 through the service last year.

Unlike Putnam County, Dutchess County collects a 4 percent room tax on every Airbnb rental, just as it does with hotel rooms. Earlier this month, more than 200 hosts and advocates gathered in Albany to urge lawmakers to adopt legislation that Airbnb says would modernize state laws, allowing New Yorkers to earn extra income through the rentals while addressing safety concerns and providing what is says would be $100 million in tax revenue.

Airbnb points to several examples where city officials have revised regulations of short-term rentals. In Portland, Maine, officials last year passed a law allowing short-term rentals in which the owner is not present, although registration fees are lower if a unit is owner-occupied.

In East Hampton, on Long Island, hosts applying for a short-term rental permit must submit a notarized Rental Property Self-Inspection Checklist that includes having the house number visible from the street, handrails on all stairways, properly marked electrical panels, smoke detectors installed and working in every bedroom, and fireplaces or wood-burning stoves having doors or screens, as well as pool safety requirements.

Allis, the Orchard Place property owner, says he plans to give renters a tour of the $475-per-night home, including its fire exits and other safety features, and if they have any concerns, he’s just a text message away.

“People would rather come into a home where they can work, turn on the TV and have a fireplace,” he said. “And if you get a bad tenant, they’re gone in a day.” Short-term rentals, he argued, are “perfect to promote Beacon,” while giving property owners the chance to earn extra income.

But other residents express concern that short-term rentals could disrupt neighborhoods.

“If somebody wants to rent a room in their home, with some regulation and registration, or do a vacation exchange, I don’t have a problem with that,” said Elaine Ciaccio, who lives a block from 51 Orchard Place. “But when you get people buying houses in residential neighborhoods as investment properties, then you’re starting to disrupt the community. I don’t want to live next to a small hotel. And if things should go south with the economy, these are the first people who are going to get out.”