The Beacon Farmers’ Market will remain at its location near Main Street this year after organizers reached an agreement with neighboring businesses. The City Council approved the contract on March 19 with Common Ground Farm, which runs the market.

The market had been a mainstay at the Beacon waterfront for a dozen years before moving last spring to Veterans Place, next to the U.S. post office, after becoming a project of Common Ground Farm. The move allowed easier access to more people, especially low-income residents, said Sara Sylvester, the market’s manager.

The market’s farm vendors saw a 35 percent increase in sales in 2017 over the previous year at the waterfront, and the number of low-income residents receiving discounted produce nearly tripled, according to Common Ground.

The market is open on Sundays from spring to fall and has 12 regular vendors, along with a handful of part-time merchants, who sell baked goods, fresh fruits and produce, wine, preserves and prepared foods, along with other products. In the winter it moves indoors at Memorial Hall at 413 Main St. 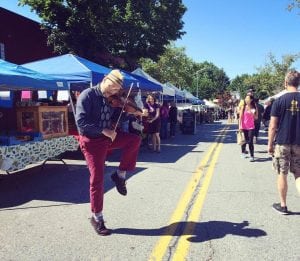 Despite some pushback about amplified music at the Beacon Farmers’ Market, a fiddler will still roam the corridor. (Photo provided)

The market’s contract with the city runs from April 22 to Nov. 18, excluding Spirit of Beacon Day (Sept. 30) and the Sunday of the annual Beacon Car Show.

When it came time to renew its contract, Phil Ciganer, the owner of the Towne Crier Cafe, asked the market to consider moving again. He noted that its vendors, some of whom are not local, sell products other than produce that create competition for Main Street stores, and that the live music had become disruptive.

“Right now I can’t open my windows” during the market, Ciganer told the City Council at its March 12 meeting. “There are food smells and more noise than I care to deal with. It’s too much competition.”

Sylvester said this week that she and Ciganer had agreed to a compromise. There will no longer be amplified music, she said, unless it’s in collaboration with a Towne Crier event or for a special occasion, such as opening day. A fiddle player who wanders the market will remain.

Sylvester and Ciganer also resolved parking issues that had frustrated Towne Crier acts trying to load equipment, and they’ve agreed to disagree on what vendors sell. While most of the vendors are local, two long-running and popular merchants drive in from northern New Jersey.

“We have [outside] vendors who have seen the market through lean years,” Sylvester said. “They have a dedicated customer base.” If those vendors ever leave, organizers will try to replace them with local merchants, she said.

4 thoughts on “Farmers’ Market to Stay Near Main”