The U.S. Coast Guard’s proposal to create 10 anchorage sites in the Hudson River, including one between Beacon and Newburgh, is dead — for now.

A newly completed safety assessment by the Coast Guard does not recommend adding anchorage grounds to the two available at Yonkers and Hyde Park. But it also did not rule out more anchorage sites being proposed in the future.

The initial plan, which came in January 2016 at the request of the Tug & Barge Committee of the Port of New York and New Jersey, would have created space for up to 43 barges to anchor in the river between Yonkers and Kingston. 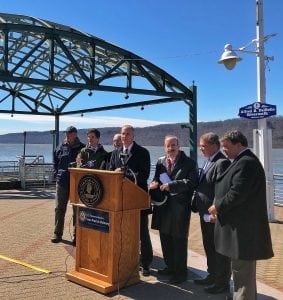 The Tug & Barge Committee said that the anchorages were needed to allow crews to rest on trips between the New York Harbor and Albany. Opponents argued the distance is too short to require such a large number of anchorages; that the anchorages would harm marine life and the quality of life for riverfront communities; and that the proposal would lead to oil-laden tankers parking in the river for weeks at a time while waiting for the price of oil to reach a favorable amount in the Port of Albany.

The Coast Guard received more than 10,000 comments, the most it had ever received on a proposal. More than 98 percent opposed the anchorages.

“We stood on this waterfront several months ago and made a promise to the people of the Hudson Valley that we would kill this proposal, and we have delivered on that promise,” declared U.S. Rep. Sean Patrick Maloney on March 19 during a news conference in Yonkers. “This proposal is dead.”

The Coast Guard report suggested the formation of a Hudson River Safety Committee that has already met twice. There also have been a number of workshops with various stakeholders.

A map showing the five barge parking spots that were proposed between Beacon and Newburgh.

“What was historic and wonderful with these workshops was that, in the same room, for the first time to the best of my knowledge, you had waterfront communities, commercial tug and barge, the shipping industry, the Coast Guard, biologists representing the aquatic life of the river, and everything in between,” said John Lipscomb of the environmental group Riverkeeper. “The safety committee continues that advance. Only good can come out of these kinds of relationships where groups that had been adversaries are encouraged to work out solutions.”

They’ll have their work cut out for them. Yonkers Mayor Mike Spano noted that on March 2, during one of the recent Nor’easters, six barges carrying construction materials for the Mario Cuomo bridge came loose from their moorings.

Although five of the runaway barges were intercepted by the Coast Guard and the Westchester County Police Marine Unit, one sank at the Yonkers waterfront. Spano said the incident couldn’t help but make him think about what would have happened had it been an oil barge.

“We wouldn’t have seen the recovery from that in our lifetime,” he said.

Maloney said in a statement on March 22 that he had inserted language into the federal omnibus spending package that will require the Coast Guard to notify Congress before it again proposes anchorages on the river.

The 2016 proposal “was buried in the Federal Register,” he said. “If the Coast Guard wants to go rogue and make a unilateral decision that ignores their own [safety assessment] report, they’ll have to come explain that.”