It costs $5 per person, each way, for a cab from the Beacon train station to the Fishkill Correctional Facility, just down the road from Beacon High School.

As Helen Lake will tell you, that fare can add up quickly. The Bronx resident travels to Beacon twice a month to visit her husband at the prison, and she usually brings one or more of their three children with her.

“It usually costs me $30 to $40 just to get back and forth, depending on how many kids I bring,” she says. That’s on top of the train fare.

The trip has been easier since her husband saw a flyer at the prison promoting the Beacon Prison Rides Project, a service in which volunteers provide free roundtrip transportation from the station to the prison, as well as the maximum-security Downstate Correctional Facility in Fishkill. 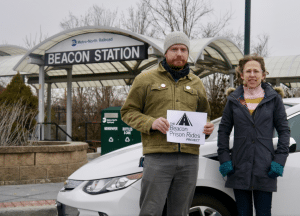 Gabriel Berlin, a volunteer driver for Beacon Prison Rides with Laurie Dick, one of its founders. Berlin is holding a sign he displays so passengers can find him. (Photo by Jeff Simms)

“It’s a big help, especially to single mothers like myself who have their spouse incarcerated,” Lake says. “It’s one less thing to worry about.”

The Beacon Prison Rides Project was launched in December by Beacon Prison Action, an activist group founded in 2015 in response to the death of inmate Samuel Harrell. Harrell died after a violent incident involving several guards at the facility who prisoners said were known as “the beat-up squad.” Although Harrell’s death was ruled a homicide, the Dutchess County district attorney and a federal prosecutor in August both said there was insufficient evidence to bring charges.

To arrange a ride from the Beacon train station to nearby correctional facilities, email [email protected] or call 845-288-1865.

“There was this shock that this could have happened in our city limits,” she says. “Just because people behind bars aren’t living in Beacon voluntarily, does that mean that they’re not part of our community? There was this feeling that we needed to step up and become more aware and try to hold our elected officials accountable for the inhumane conditions at these prisons.”

Since its founding two years ago, Beacon Prison Action has advocated less solitary confinement and organized letter-writing campaigns against proposals that would restrict which books families can send to New York prisoners. The prison rides project is its latest initiative.

“We thought this is one small thing that we could offer to people,” says Dick. “More than just the money it would save them, it’s also a friendly face and a little bit of a connection to the place where your loved ones are, and seeing that there’s a community here for you.”

She adds, “Just because someone’s coming to Beacon for a specific purpose that’s not tourism, that’s no reason to not show them the same friendliness, and to welcome them.”

Source: NYS Department of Corrections. Figures as of Jan. 1, 2016, unless indicated.

Gabriel Berlin, one of about 15 volunteers who provide rides, said that his passengers have been friendly and appreciative. “It’s one small way to do something about the inequalities in the criminal-justice system and the prison industrial system,” he says.

The Beacon Prison Rides Project also provides transportation for volunteers from the Parole Preparation Project, a nonprofit in New York City that trains people to help prisoners prepare for their parole hearings. Inmates in New York are not allowed to have lawyers or other advocates accompany them to the hearings. 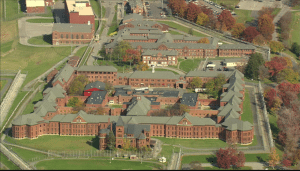 An aerial view of the Fishkill Correctional Facility in Beacon

Dick said she hopes the rides project will help preserve the connections between inmates and their families. “When a person gets out of prison, reintegration to the world outside is so much easier if they’ve maintained contact with their community and their family,” she says. “That lowers recidivism rates as well.”

Helen Lake is way ahead of her. After 25 years behind bars, her husband was paroled and will be released in May. Lake has already scheduled a physical and mental exam for him and referrals to job placement and training programs.

“We’re trying to make his transition as smooth as possible,” she says. “We want to make sure we give him the right tools.”

10 thoughts on “Free Rides to Prison (and Back)”