Beacon has sold the site of its former highway garage, a 2.6-acre lot on Creek Drive, to developer Rodney Weber, who plans to build nine residential units along with a 12,000-square-foot “co-working” space.

Weber already owns the adjacent parcel, which has been approved for 46 residential units and is nearly complete. He could have built 10 more units on the parcel, but those will be shifted to the former Department of Public Works site and reduced by one. The two properties will share access, making the land sale, as Council Member George Mansfield called it, a “win-win.” 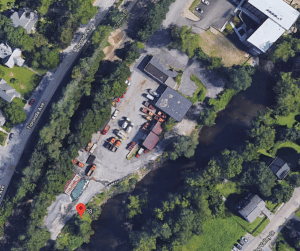 The city will sell its parcel on Creek Drive (Google Maps)

The city issued a request for proposals on the parcel several years ago but it brought in only one application, for a residential development. A second request, issued more than a year ago, generated two residential proposals and Weber’s mixed-use plan.

The council approved the sale for $150,000 at its March 19 meeting. The agreement also requires Weber, who is developing the proposed Edgewater project on the west side of Beacon, to make significant improvements to the site, including building a public park that would tie into the planned Fishkill Creek Greenway & Heritage Trail and a smaller pocket park between the two buildings.

After tearing down the highway garage, Weber will construct the mixed-use building in the historic industrial style prominent along Fishkill Creek, architect Aryeh Siegel said. The developer will seek a variance from the Zoning Board of Appeals for the height of the mixed-use building. It and the building under construction will both be four stories, but because the ground is lower in that area, they’ll appear shorter, Weber said.

The nine residential units at the highway garage site would range from 2,000 to 3,000 square feet. The plan for the co-working space, he said, is to “attract innovative think-tanks and new ideas and companies.”