On the first Tuesday evening of each month, Quinn’s in Beacon draws a crowd that draws.

They come to the Main Street restaurant for Club Draw, a gathering founded in 2013 by designer Dan Weise. The next session, its 55th, is April 3. 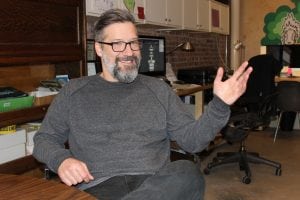 Dan Weise (Photo by A. Rooney)

The artists who fill the booths at Quinn’s sketch and socialize, create podcasts and listen to a DJ spin background music. The crowd is a mix of professionals, amateurs and people who haven’t drawn since they were using crayons. Satellite events have been held at the Hudson Valley Center for Contemporary Art in Peekskill and at University Settlement Camp in Beacon, where last year’s club picnic attracted more than 200 people and 12 bands. 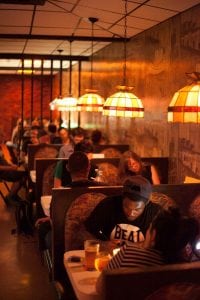 Illustrators fill a booth at Quinn’s. (Photo by Ethan Harrison)

Community art projects were not on Weise’s mind while growing up in Salt Point. It was all snowboarding, all the time, except when he was skateboarding. Not a lot of his friends shared his passions, so after high school he moved to Vermont, where he met “people like me, who were interested in snow and art.”

He next moved to Denver to enroll in the Rocky Mountain College of Art and Design. He and other students were frustrated that the college split the art and design schools and protested. “It was a powerful moment of organization, merging these two worlds,” he recalls. “It made a big impression.”

After a year in Australia, Weise returned to Denver. He hooked up for a while with a gallery large enough to hold a skateboard ramp, then came to New York with a girl, Kalene Rivers, then active in the city street art scene and now his wife and partner in their design firm, Thundercut Studios.

They began in Brooklyn, but after their rent doubled, moved to Carmel. Weise went looking for studio and gallery space, which brought them to Beacon in 2007. 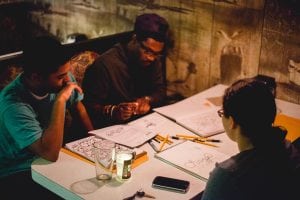 Club Draw meets on the first Tuesday of the month. (Photo by Ethan Harrison)

The couple’s space in Beacon happens to be opposite a former electric blanket factory, which inspired Electric Windows in 2010. “Along with Nicole and Jeff from Beacon Art Supply, we envisioned artwork installed in each of the windows,” he says. “We asked 24 artists we knew, ‘Want to come to Beacon and paint for a weekend?’ ”

That collaboration was followed by another with Cary Janks, Electric Projected, in 2011, in which animated shorts were projected onto the building’s façade. In a more recent partnership, Weise joined with author Jennifer Clair and photographer Meredith Heuer, both fellow Beaconites, to create a cookbook.

Weise hopes to continue working with other artists and organizing. “Inspiring people and helping facilitate feels like my life’s creative project,” he says. “Every day I’m usually thinking of how I can bring multiple pieces of family and community together in an unexpected way.”

A gallery of invitations created by members of Club Draw.