After eight years away, shop returns to Beacon

Laura Gould’s “conscious-living” shop, Sanctuary, has done some traveling. She opened in 2002 on the east end of Beacon, moved a few years later to the opposite end of town, went across the Hudson to Nyack for eight years, and a year ago returned to Beacon.

Customers have been happy to discover and rediscover her shop at 192 Main St., which is filled with decorative objects evoking south and Southeast Asia, many with a spiritual bent, along with clothing, furniture, baskets, candles, lamps and rugs. 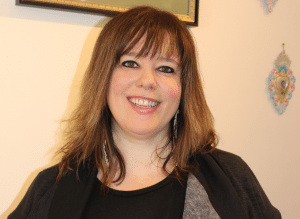 Laura Gould, proprietor of Sanctuary (Photo by A. Rooney)

“Everything in the shop is ethically sourced,” Gould says. “The global goods are all fair trade. Ever since I opened 16 years ago, my business model has been ‘having a conscience.’ Now it’s easier, because people are more aware of what they are buying.”

She says customers are sometimes puzzled by her stock and “ask if everything is from India, or if everything is Buddhist.” She explains that it’s not where an object is made “but how it was sourced, what the soul of it is. I like to know that nothing is being produced in sweatshops. It’s particularly widespread with clothing, but I look for women’s cooperatives. 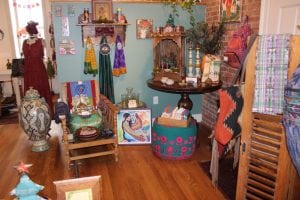 A colorful corner of Sanctuary (Photo by A. Rooney)

“The dynamics have changed and business is far more global now, and is affected by things people don’t necessarily think about: tariffs from China; wars that interfere with trade; people becoming more mindful of knock-offs,” she adds.

Raised in Rockland County, Gould had many early professional lives. She worked on Wall Street (which she recalls as “soul sucking”), then spent five years at a literary nonprofit before joining a gallery that specialized in Asian art and antiques.

It was there she was exposed to Buddhist philosophy, she says, and was especially taken by “the notion that mistakes are part of life, that nothing is perfect. I also got interested in the melding of Hindu and Buddhist traditions in Java and its art.” 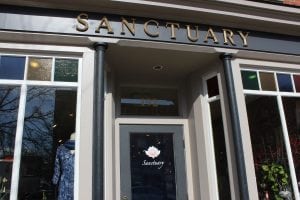 When the gallery struggled financially, Gould struck out on her own. She and her husband decided to open their own shop in Beacon despite visiting during a blizzard. “We saw the architecture, we drove down Main Street and saw the mountains and thought it was the most beautiful town we had seen,” she says. She combined running the gallery with interior design work for clients in Cold Spring and Garrison. (She and her husband live in Goshen.)

Soon after she opened, Gould and others, including Carl Van Brunt, Florence Northcutt and Thom Joyce of the Howland Center, and John and Wendy Gilvey of Hudson Beach Glass, founded the Beacon Arts Community Association (BACA), now known as BeaconArts. “We were early investors in the town,” she recalls. “And by investors I mean money, heart and soul. We had an idealistic vision.”

Returning to Beacon has been rewarding, she says, particularly when longtime customers are surprised to see her. “When they come by to visit and shop again, there’s nothing more gratifying,” she says. “My heart has always been invested here.”