On a unanimous vote at its March 27 workshop, the five-member board authorized Mayor Dave Merandy to sign a memorandum of agreement with the fire company defining the arrangements. The agreement, which expires on Dec. 31, commits the village to paying the $117,218 “for fire protection services” in installments of $58,609, due April 1 and July 1.

Two days after the board acted, the CSFC approved the agreement, which CSFC President Matthew Steltz signed.

The $117,218 is only part of the total cost of having a local fire department. Village Clerk-Treasurer Jeff Vidakovich said Friday (March 30) said it “represents the amount the fire company requested to provide fire protection services for all municipalities served.”

The payments exclude expenses, not enumerated in the agreement, for the Length of Service Award Program, or LOSAP, a volunteer firefighter pension, and LOSAP administrative fees; Workers Compensation insurance; and the fire company’s operating costs for utilities, the siren, building maintenance, and related necessities.

As outlined in the agreement, the three municipalities will divide the grand total of costs — the fire protection charge, plus the LOSAP, Workers Comp, and CSFC operating expenses — on a percentage basis: Cold Spring, 52 percent; Philipstown, 29.5 percent; and Nelsonville, 18.5 percent. 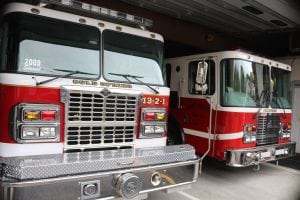 The CSFC covers parts of Philipstown bordering the villages, while the Garrison, North Highlands and Continental Village fire companies cover the remainder of Philipstown (although all four companies provide mutual aid).

According to the memorandum of agreement, by Sept. 15 the fire company will give the village its annual budget, based on costs incurred the previous year and anticipated expenses for the coming year. Fifteen days after accepting the budget, the village will provide a new agreement for the following year.

Nelsonville scrapped with Cold Spring for months over its contribution to the cost of fire protection and LOSAP, a pension for volunteer firefighters. Merandy said Tuesday night that their talks continue, “though I think we’re there.”

In other Village Board business, Highway Department Crew Chief Robert Downey asked that the department be allowed to “cease and desist from entering” two private streets, East Belvedere and Hamilton, to collect garbage and recycling because both pose safety and equipment problems. The streets run east from Route 9D.

Hamilton presents difficulties for maneuvering vehicles and plowing while East Belvedere “is loaded with potholes,” he told the board Tuesday. 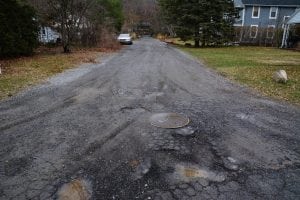 Trustee Marie Early observed that village trucks do not collect garbage or recycling on two other private streets, Northern Gate and West Bank, whose residents haul their bins to intersections for pickup.

The board agreed to inform residents on Hamilton and East Belvedere that they must do the same. Meanwhile, Merandy said the board would consult the village attorney and consider more permanent options.

East Belvedere has long proved vexing to the village. In 2009, Airinhos Serradas, who soon after became a village trustee, argued that Cold Spring had to fix the street, where he lives, because it had periodically tried to improve it. 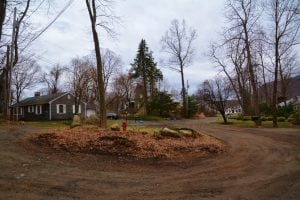 At the time, board members recalled that unhappy residents had been informed about five years earlier that they had to unanimously cede ownership of Belvedere to the village if they wanted the Highway Department to maintain it. The board even set aside money for work. But a lone holdout refused to join neighbors in relinquishing the street.

On Tuesday, Serradas returned, acknowledging the street is private but arguing that Cold Spring nonetheless should fix it. “The village has been taking care of the road for 40 to 50 years,” he said. “You need to continue taking care of it.”

“I’m not going to do improvements on a road until I know it’s ours,” Merandy said.

Robert Flaherty, the Philipstown Town Board’s liaison to the Village Board, said Carl Frisenda, the town’s highway superintendent, went “up there with the grader and did some work” last year. “I think it was just out of goodwill, good faith.”