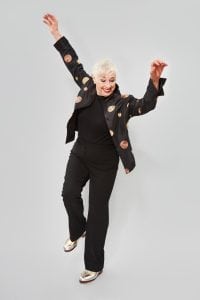 Brenda Bufalino, 80, is known for her improvisation

One of the pre-eminent tap dancers of the past 50 years will visit Beacon this month. Brenda Bufalino, 80, is scheduled to talk about and demonstrate her improvisational style at Ballet Arts Studio at 11 a.m. on Sunday, April 15.

Along with Tony Waag and the late Charles “Honi” Coles, Bufalino co-founded the American Tap Dance Orchestra (later the American Tap Dance Foundation), whose members performed around the world from 1986 to 1999. The company also operated the Woodpeckers Tap Dance Center in New York City, which became a magnet for talented performers.

“Tap dance, in all its myriad colorations, has spread and is being developed around the globe, and I’m so happy to still be a part of that process,” Bufalino says.

The dancer, who has soloed at Carnegie Hall, the Apollo Theater and the Kennedy Center, recalls in her memoir, Tapping the Source, how she was steered to tap classes as a girl because she was judged to be too “distracted.” Even then, she was drawn to improvisation, rather than routines.

“Improvisation is a way of life,” she wrote, recalling that her mother told her: “Take risks. There’s nothing to lose. The worst that can happen is that you end up back where you started.”

At age 13 Bufalino began commuting from her home in a Massachusetts town to Boston to study traditional rhythm tap. But she also loved the improvisation of Dizzy Gillepsie and Charlie Parker. Although she stood out as a white girl in what was then a largely black and male world of tap, notes Margaret Fuhrer in American Dance: The Complete Illustrated History, by age 16 Bufalino was performing in nightclubs. Soon after she moved to New York and began training with Coles. 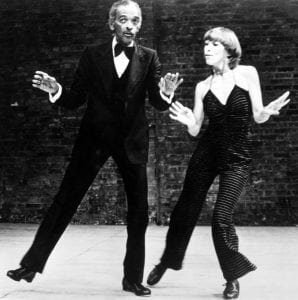 “Some black tappers frowned upon colleagues who trained white dancers,” reports Fuhrer, “but Coles shrugged off such criticism. ‘No blacks want it, and she does,’ he said. ‘Nobody else can do it, but she can.’ ”

Bufalino left tap for a few years in the early 1960s to write plays and poetry but returned in the 1970s and in 1977 released a documentary, Great Feats of Feet, and began organizing tap shows around New York. That led to the American Tap Dance Orchestra, and Fuhrer credits Bufalino with pioneering group tap choreography after decades of solo performers.

Katie Bissinger, who teaches tap at Ballet Arts, and who arranged for Bufalino’s visit, says that the lesson for dancers in watching Bufalino is that she is able to let go of the fear of “doing it wrong.” Although the traditional conservatory approach to dance, particularly ballet, focuses on precision, she says, it’s also “important to teach young people that they can make mistakes. I’m hoping Brenda loosens everyone up!” 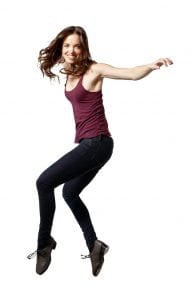 A Short History of Tap

Modern tap originated around 1920 when “taps” were nailed or screwed into shoes at toe and heel. In Shuffle Along (1921) a chorus line appeared with “tap shoes.” Vaudeville variety shows expanded tap’s appeal, as did nightclubs and musicals. In 1934, Shirley Temple, 6, trained by Bill “Bojangles” Robinson, made the first of her 24 films and caused enrollment to skyrocket in tap classes. Much later, variety shows on television kept dancers employed.

Several tap companies formed in the 1970s and 1980s, including the Jazz Tap Ensemble in 1979, Rhapsody in Taps in 1981 and the American Tap Dance Orchestra in 1986. But only when Gregory Hines came on the scene in the 1989 film Tap did it soar back into the public imagination. That was followed in 1996 by Savion Glover’s musical Bring in ’da Noise, Bring in ’da Funk, which won him a Tony Award for choreography. More recently, Michelle Dorrance, who leads her own company and is a MacArthur “Genius Grant” recipient, in March was commissioned to create three works for the American Ballet Theater.

Bissinger, who lives in Cold Spring, contacted Bufalino after watching a video produced by The New York Times as part of its “Daily 360” series [below] in which Bufalino dances around a room. The video includes a brief reference to Gardiner, New York, and Bissinger realized the tap great was “in our backyard.” (Bufalino has since moved to New York City.)

Bissinger hopes her students will appreciate not only Bufalino’s place in dance history but the depth of her skills. 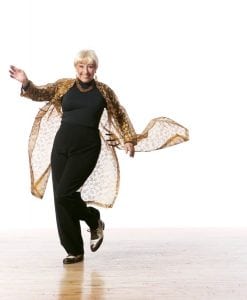 “I want the kids to make the connection of what she did to ‘here she is,’ ” the instructor says. “I want them to think about how you create the dances, how you make music with your feet. We’re musicians, not just dancers. ‘The floor is a drum’ is a saying we use with dancers when they’re little. As a tap dancer, you need to learn what an eighth note is, a 16th; you have to be versed in that language.”

For her part, Bufalino observes that “finding your voice or your style is a mercurial and illusive process. It would be more appropriate to say, ‘How can I get out of my own way, so my voice can find me?’ ”